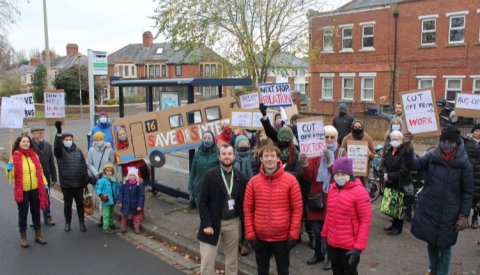 On the evening of January 1st, the last number 16 Stagecoach bus set off from central Oxford: travelling up Abingdon Road, over Donnington Bridge, through Florence Park and on to the Cowley Centre and Littlemore on its way to journey’s end at Minchery Farm. Outside the Jolly Post Boys pub, the last bus was greeted by a singing, cheering crowd wielding a large cardboard replica bus, placards and candles.

We presented the driver with chocolates to share at the depot in thanks for the service that he and colleagues had given over the years. The driver then stepped off the bus to video the crowd and tell us how much the drivers had appreciated the community spirit they had met on this much loved route.

This was the moment that our campaign to save the bus became the campaign to bring it back.

The impact of losing the 16 bus is partly down to geography – it was the only bus between the city centre and the ring road which crossed the Thames and which linked two main routes into the city.

But it is also very much about the social and economic profile of the city. It connected areas with high deprivation rates with areas containing affordable and accessible community, leisure, health and shopping facilities. Now there is no bus running over the Thames at Donnington Bridge linking communities on each side with each other and with vital services and facilities.

We launched a petition which collected over 1,000 signatures online, from people in their homes  and from many more on the bus. This was usually the first that shocked bus passengers had heard of its axing. While many who signed cited the madness of cutting the only bus that ran through our new Low Traffic Neighbourhoods, most spoke about their personal losses.

Words most often heard were ‘it’s a lifeline’, ‘I’ll be trapped in the house’ and ‘isolated’. Passengers, who included the elderly, people with disabilities, heavy shopping and young children, told us that they would no longer be able to get to the more affordable Cowley Centre shops, Hinksey Pool or medical services without walking to a distant bus stop or enduring a long journey on two  buses – and two fares. One bus company (not Stagecoach) confirmed that direct journeys that previously took between 10 and 20 minutes would now take 45 minutes.

We were even advised that someone travelling between Templars Square in Cowley  and Donnington Health Centre (previously a directly journey of 8 minutes, now an indirect one involving a bus that only runs 5 times a day) could take a taxi at a cost of £10!

The campaign so far...

The petition has been presented to the bus companies and County Council.  City and county councillors along the route are actively supporting the campaign to bring back the bus. So is our MP Anneliese Dodds. There is a chance that the County Council might win some of the limited government money on offer for bus services post-COVID.  Supporting this effort to fund the return of the 16 is now our priority.

We’ve learnt a lot along the way. Gone is our naïve assumption that buses are a public service with public duties to match, like equality of access for people with disabilities.

Stagecoach’s decision to axe the 16 route was taken without notice or consultation with bus passengers and with no impact assessment of how communities would be affected or equalities undermined. A wheelchair user who used the 16 bus on a daily journey from her home to Hinksey open air pool on Abingdon Road has lost her access to fitness taken for granted by others. Another person with mobility issues can no longer get to her place of worship.

The clue that profit is the only motive that matters to them is in the bus company's insistence that we are customers, not passengers.

We’ve learnt that it’s the poorest communities which are targeted by bus cuts. Oxford’s reputation is as a rich city. Not true – there are areas of acute poverty and deprivation. The 16 bus connected some of these communities to the city’s only fully accessible shopping centre which also happens to include more affordable shops like Iceland and Wilkos; even more important as household costs rise. Previous bus cuts also targeted less advantaged areas like Cutteslowe to the north of the city where the community lost its only bus into the city.

We’ve learnt that fine words about “active travel” and reducing pollution are meaningless when they are based on the assumption that everyone can walk or cycle.  Cutting the buses will just drive those who can do so back into their cars with all that means in terms of emissions and congestion.

We’ve learnt that local democracy is not what it seems: despite the apparent involvement of council officers in Oxfordshire’s negotiations with the bus companies, our local councillors were unaware of the 16 bus cut until they got a press release two days before it was sent out in the run up to Christmas. While other bus routes were merged, the axe that fell on the 16 alone was buried in a long list of revised services. Our councillors were as shocked as we were.

But we’ve also learnt that there are ways to fight back.

We're fighting for the future

Last year, a passenger-led campaign, backed by We Own It, pushed Andy Burnham to take Manchester’s buses into public control.

That means the final say on routes, fares, and accessibility standards will lie with local people, not in company boardrooms. It also means that essential routes like the number 16 can be cross subsidised with the profits from busier routes, rather than axed to maximise dividends to shareholders.

Other areas are already following Manchester’s lead. As a County Council, it is less straightforward for Oxfordshire to do this, so our top priority is to bring back our axed services. But our longer-term goal must be to ensure the Council takes control of local services, so they fully meet the needs of the community.

This blog was written by Adele, Caroline, Dalya and Judith on behalf of the ‘Bring Back the 16 Bus’ campaign.