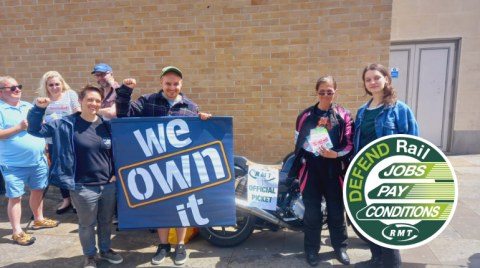 This week, 40,000 members of the RMT union have taken the biggest industrial action seen on the railways in the last 30 years. These strikes are happening in the context of two crises: the cost of living, and the chaos of our fragmented, privatised rail network. The government wants passengers to blame rail workers - but here's what they don't want you to know.

The government has ordered 10% cuts to our railways, and if you’ve taken the train recently you’ll have seen the impact this has had on services. Now they want to cut 2,500 maintenance jobs - a 34% cut to essential maintenance of the infrastructure. They’re also planning to axe vital jobs in stations, control rooms, catering and retail, and are planning to close 1,000 ticket offices. Rail workers who aren’t facing redundancy are being presented with below-inflation pay rates which amount to pay cuts, alongside worsening terms and conditions.

All of these cuts will result in more disruption to journeys, more breakdowns, and a higher risk of fatal railway accidents. They will mean no-one to ask for help at the station, vulnerable and older people cut out of buying tickets, and unsafe working conditions leading to less reliable journeys for everyone.

With our privatised and underfunded system, the government shoulders the risk involved when things go wrong while the private sector walks away with the profit. Now they are trying to force workers and passengers to bear the costs.

During the pandemic, passenger numbers fell to their lowest since 1872. Instead of bringing all the rail franchises back in house, to create a publicly owned system that could withstand the crisis, the government chose to spend £10bn of public money propping up the private rail companies.

RMT research has found that rolling stock companies Angel, Eversholt and Porterbrook paid out nearly £1 billion in dividends at taxpayers’ expense between 2020-21: the equivalent of half the £2 billion in fares paid by passengers. It also reflects a signficant proportion of the £8.3bn the industry recieved in taxpayer support in the same year.

It’s clear that reclaiming the  £1 billion a year that is wasted on privatisation and reinvesting it in our services should be the priority.

Grant Shapps has promised ‘Great British Railways’ for the public, but these cuts to services make it obvious that this is just an attempt at rebranding unpopular austerity and privatisation. The only way forward for our railway is to properly fund it, and to take it into public ownership - and 64% of the population agree, with the support of 68% of voters in ‘Red Wall’ areas.

An efficient, safe, reliable railway is a vital part of the public transport system we urgently need as part of the solution to the climate crisis. Rail workers kept the system moving during the years of the pandemic, and the government could have taken this opportunity to encourage more people out of cars and planes and onto trains. Instead of investing in and growing our railway, Shapps is imposing cuts to shrink it - cuts which impact all of our lives.

RMT members are currently on strike for their jobs, pay and conditions as part of this bigger picture. The government’s response is hammering home the fact that our Transport Minister has no vision for public transport beyond destroying services through austerity. By taking action, these rail workers are also fighting for railways that are fit for the future.

We must take back our PUBLIC transport into public hands.

I love our railways but as an autistic rail user, I rely on help from ticket office and station staff. Without this, I will be forced off using rail. Even with a rail card, I am struggling to afford to use services. I fully support the RMT