Letter: The House of Lords must protect our NHS

The government's Health and Care Bill, which will allow private companies to sit on boards that decide how NHS money is spent, is being debated in the House of Lords.

Peers have a massive opportunity to protect our NHS by passing amendments to ban private companies on NHS decision-making boards.

We are writing to the leaders of the Labour, Liberal Democrat and Crossbench groups in the House of Lords to ask that they whip their benches to back amendments to protect our NHS. Read the letter below.

Can you add your signature to our letter and give it more weight? 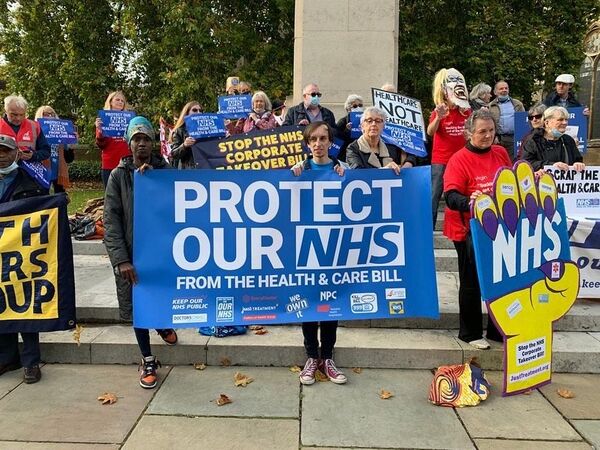 We the undersigned are writing to thank you for the work you have been doing in the House of Lords to ensure the government's Health and Care bill is fit for purpose.

More specifically, we want to thank you for supporting your peers to put forward amendments to:

We encourage you to continue to fight for this issue at Report Stage and to push these amendments to a vote. We also encourage you to, where appropriate, whip your benches in support of these votes.

Whatever a person’s views on the suitability of ICSs as the way to organise our NHS - and many of us believe it is unsuitable - most people of good faith agree that private companies should not get to decide how NHS money is spent and that NHS Trusts and Foundation Trusts should take priority over private companies in the commissioning of NHS services.

Private companies should not decide how NHS money is spent:

A We Own It/Survation poll from July 2021 found that the majority of people in England opposed allowing private companies to sit on Integrated Care Boards (ICB), with 68% of people saying that allowing them to sit on those boards represents an unmanageable conflict of interest.

Virgin Care (which has recently been rebranded as HCRG Care Group) sits on the shadow, non-statutory Integrated Care Partnership Board of Bath, North East Somerset, Swindon and Wiltshire. After recent pressure, the ICS has pledged that they will not be invited to sit on the statutory ICB.

Similarly, the Buckinghamshire, Oxfordshire and Berkshire West ICS has responded to calls from their local community by pledging that private companies will not receive a seat on their statutory ICB.

If the very people who will administer this new system already recognise the risks associated with allowing private companies a seat at the decision-making table, the House of Lords has a duty to take heed of this lesson and put a strong ban on the face of the bill.

The government’s amendment in the Commons, which leaves the decision at the discretion of the chair of each ICB is vastly unsatisfactory. It will lead to a lack of consistency in decisions about who sits on ICS boards across the NHS. As Baroness Finlay has pointed out, this opens our NHS to legal squabbles.

NHS Trusts and Foundation Trusts should be the preferred providers of NHS services:

The Health and Care Bill scraps Section 75 of the 2012 Act, which required that contracts above a set value be put out to a competitive tendering process for all providers including private companies.

This is a welcome move. But scrapping Section 75 without establishing a presumption in favour of commissioning with NHS Trusts and Foundation Trusts opens the door, as the British Medical Association (BMA) has pointed out, to contracts being handed to private companies without proper scrutiny and transparency.

Here are the reasons we believe that NHS Trusts and Foundation Trusts should be treated as the default providers of ALL care in the NHS:

Thank you so much for your time. We look forward to seeing your peers vote to back amendments to ban private companies on NHS boards and to make the NHS the default provider of NHS services.