time to take back our water

When you turn on a tap to make a cup of tea or run a bath, you're using water that should belong to all of us. But right now, if you live in England, your water is privatised. This means higher bills, more leaks and not much control over our water - even though we can't live without it.

Let's spread the word - it doesn't have to be this way. In Scotland and Wales, water is already run for people not profit. The tide is turning across the world as cities take control of their water. ​

Back in 1989, the government sold off our ten previously public regional water companies. Our water and sewerage is now run by nine regional private monopolies which are mostly owned by private equity. So the money you spend on water bills creates a profit stream for investors as far afield as Australia, Canada, Malaysia and Hong Kong.

You don't get a choice about where you buy your water from. Since privatisation, your water bill has increased by 40% in real terms. Research shows that water privatisation means higher prices and/or lower investment in water infrastructure.

"The idea that somebody owns water is absurd ... a visitor from another planet might wonder why something so fundamental to our existence, indeed something we are almost wholly composed of, is bought and sold for the monetary advantage of a select few." Pete Magee, We Own It supporter

Research from Corporate Watch shows that water companies paid out £57 billion to shareholders since 1991: an average of more than £2bn a year since water was privatised. In 2021, water company bosses pocketed £15 million in pay and bonuses. The highest paid directors at the water companies have been paid £70 million over six years. Six water companies have been found to be avoiding millions in tax. Water companies can rely on you paying your water bills regularly, and they use complicated debt structures to make huge amounts of money. Meanwhile, water poverty is increasing as the poorest households struggle to pay their bills.

As a Mail on Sunday investigation uncovered, huge debts of billions are piling up in the water industry - confirming what we already know: that our water bills are rising to pay for huge shareholder payouts.

63% of us want water to be run for people not profit. If water belonged to all of us, we'd all save around £2.5 billion a year. That means your household would save around 25% or £100 a year on bills. Public ownership would be cheaper because we wouldn't need to spend money on dividends for shareholders and higher interest payments. It would also mean more control over the water we need for cleaning, cooking our dinners and watering the lawn on a summer evening.

100 million people around the world are enjoying publicly owned water

The tide is turning against privatisation across the world. In the last 15 years, 235 cities in 37 countries have taken their water into public ownership - check out where this is happening. This is improving the lives of 100 million people. The trend is on the increase and is mostly happening in high income countries. In France, 94 cities have brought water into public ownership. In the US, 58 cities have done so.

Both the Netherlands and Uruguay have made water privatisation illegal.

In Scotland and Wales, water is run for people not profit

If you live in Scotland, your water is already run for people not profit - and you're paying less than the rest of us. The publicly owned company Scottish Water is the most trusted public utility in the UK. It is constantly investing, keeping customers happy and reducing its carbon footprint.

"In Scotland the water supply is still publicly funded-and long may it last. Compared to England and Wales, there are no glaring inefficiencies, no shareholders to mollify, no drive to force up charges. We pay the water charges with our council tax and it works!" Jane, We Own It supporter

In Wales, much of the country's water is provided by a not-for-profit company, Glas Cymru/Welsh Water. The company serves 3 million people and helps 60,000 low income customers to pay their bills. People are happy with the service - surveys show sector-leading levels of customer satisfaction.

Come on England, let's stop pouring money down the drain

Wouldn't it be great if when you turned the tap on, you knew the water belonged to all of us? If your cup of tea or your bubble bath was just there for you to enjoy and not a revenue stream for private investors? Let's follow the examples of Paris and Berlin, Scotland and Wales.

Check out the People's Plan for Water - a crowdsourced manifesto for what the water companies will do when we own them! 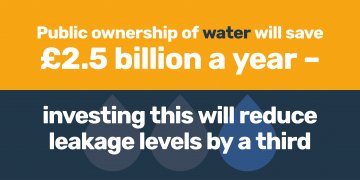 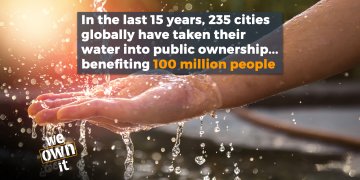 Water is a human right, and privatisation has failed. For 30 years, the private water companies in England* have ripped us off, polluted our rivers with raw sewage, dodged taxes and let our water drain away through leaky pipes - all while extracting BILLIONS in profit and paying their CEOs MILLIONS!

63% of us support public ownership.

Yes, I believe water should be in public ownership.

Cleaning up rivers ‘was not on customers’ priority list’, water company boss claims