How do you use your local park? Maybe you jog around it or walk the dog through it. Maybe your children have fun in the playground or it's a place where you have picnics with friends in the summer. Parks keep us healthy, both physically and mentally. They are fantastic green spaces that communities share.

Right now, the government is making drastic, unnecessary cuts that are damaging people’s lives. Our precious parks are competing with other public services for squeezed council funding. Because of this pressure, councils are looking at options for selling off bits of land, outsourcing parks management and making money by allowing private companies to rent out the space.

Parks help us breathe and reboot. We have enough money for them - they should be properly funded and run for people not profit.

Parks were created for people

Britain’s public parks are over 175 years old. 30,000 local residents sent a petition to Queen Victoria calling for a park – and the Victoria ‘’People’s Park” in London was created. So our very first park was a campaign victory for people power!

Today there are around 27,000 public parks across the country, used by 37 million people every year. Public parks provide essential green open spaces for local communities. We need them.

"Parks are a public good. They provide a space to breathe, to think and to play; many were set up by philanthropists for the health and benefit of local communities, and should be kept in public ownership for all to enjoy." Bernadette Turner, We Own It supporter

Our amazing parks are suffering from 'decline and neglect'

Heritage Lottery Fund research shows that more people are using parks and 79% of the public support investing in them - but cuts mean parks are suffering from 'decline and neglect'. Council budgets have been drastically cut - and many councils are choosing to spend their budgets on other services. Parks are amazing, but councils don’t have a statutory duty to provide them.

In 2016, 92% of parks managers reported cuts to their budgets over the last three years and 95% expected cuts to continue. Fewer staff and resources make it difficult to maintain parks in good condition. This also means less support for park volunteers and community groups.

“London’s parks are at a crossroads and we cannot continue as we have in the past – the money simply isn’t there… communities risk losing control of parks, along with democratic accountability for the open spaces that they value so much. The strain is showing on the resources available for parks, leisure and sports facilities… There is doubt about whether or not councils will be able to support these groups as boroughs divert what money they have to meet statutory responsibilities such as adult social care." Councillor Julian Bell, Chair of London Councils’ Transport and Environment Committee

Burnley is committed to keeping its parks public - but like many councils, cuts mean that it must increasingly rely on volunteers to help manage its parks.

“We are having to make huge savings. We have lost 50 per cent of our staff – down from about 90 to 45. But the area of parks remains the same and the public expectation as to the quality of the parks remains the same. So do we just spread the butter very thinly or do we try and find a different way of managing some areas?” Simon Goff, head of green spaces in Burnley

"A slide towards privately-run parks"?

Councils are scrabbling around to come up with solutions – and privatisation is creeping in as an option.

Some councils have already begun selling off bits of their parks for development. In the last three years, around 10 parks have been partially (or in one case wholly) sold off. Heritage Lottery Fund research from 2016 suggests 9% of parks managers are considering selling off whole parks or parts of parks in the next three years. London Councils has warned of a 'slide towards privately-run parks' by 2020 if government cuts continue.

Privatisation is damaging. Sell offs mean we lose our green spaces altogether. Involving private companies in parks management or events means we lose public control over our parks – or we have to pay fees to use them. Here are a few examples…

In 2015 the city’s mayor announced plans to sell Sefton Park Meadows, an 11-acre green space, to a house-builder.

“It’s only a small piece of grassland on the edge of the park, but it’s aesthetic to the area. Yet the mayor has indicated a company can come in and build 30 houses on it. There’s no need for them – it changes the whole dynamic of the area. The local people are up against it.” Stephen McNally, chair of Save Our Green Spaces Liverpool

After a powerful community campaign, it was confirmed that Sefton Park Meadows would not be used for housing. However, the city's Mayor has said that they still want to put the land to other use, rather than maintaining it as a green space for all to enjoy.

In 2015 the treetop adventure company Go Ape opened for business, offering climbing sessions for £18 - £33 per child. Locals in the area felt concerned that guilt-racked parents would feel pressured to pay up:

"Just last week on Sunday we were walking in the park and the grandchildren were saying, ‘Oh, we want to come here.’ Then we realised that it’s private. My son can’t pay, none of us can pay that. Battersea Park is a back garden for thousands of people. What happens to those parents who don’t have £100 or £50 in their pocket?” Graciela Sanchez, Battersea resident

Protests were also sparked in the area as the park hosted a two-day Formula E race. Problems with noise, disruption and damage eventually led to the organisers agreeing to withdraw.

“There was banging and clashing from around 7.30 in the morning, often until about 10 at night. If you lived opposite the park, you couldn’t open your windows... It was awful, and it smelt, because the HGVs run on diesel. It wasn’t what you would expect in a beautiful Victorian park.” Susan Lofthouse, secretary of Battersea Park Action Group

For many years, the city council has held fairs and circuses at Ryelands Park. Last year, however, increasingly super-sized and extended events were reported, causing damage to the park and disruption to locals. Campaigners presented a 700 signature petition to their local council, arguing that they had breached a licence agreement signed in 2005 which had been retrospectively changed.

Let's protect our parks for the future

MPs launched an inquiry in 2016 on the future of public parks. In response, we carried out polling which showed that 70% believe privatising parks is unacceptable and 75% want councils to have a legal duty to protect public parks. The public supports well-funded parks that belong to all of us.

Parks make our lives greener and happier - we need to protect them for the future. Join your local Friends of Parks group to help defend your park against cuts and privatisation. Find out more at the National Federation of Parks and Green Spaces. 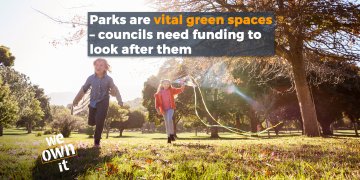 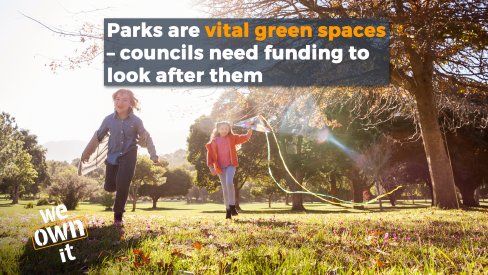