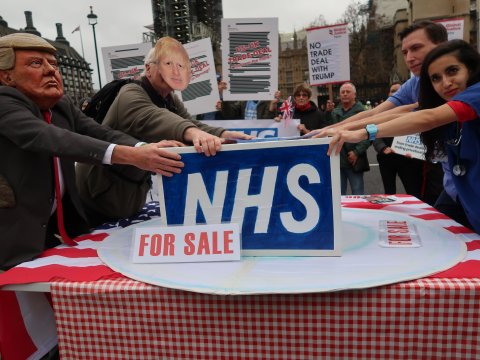 Tomorrow, Monday 20th July, the Trade Bill is in parliament.

Shockingly, it contains ZERO protection for our NHS from trade deals - and our MPs have NO powers to scrutinise or vote against trade deals that do include our NHS.

84% of us want our NHS in public hands. 1.2 million have signed the petition asking for our NHS to be protected from a Trump trade deal.

Jonathan Djanogly, a Conservative MP, has put forward a really important amendment that would give MPs the power to scrutinise trade deals on our behalf and make sure OUR NHS is protected. Djanogly's amendment for scrutiny has been backed by ten other Conservative MPs so far, as well as MPs from other parties including Labour, the Scottish National Party, the Liberal Democrats, Plaid Cymru and the Greens. You can read more from Djanogly here.

If you haven't written to your MP yet, please write to them now to ask them to vote for Jonathan Djanogly MP's amendment tomorrow, Monday 20th July.

If you've already written and received a reply from your MP, here are the 3 arguments you need to send back to them TODAY about why they should support the Djanogly amendment. You can reply to their email or write to them via https://www.theyworkforyou.com/

The Trade Bill is NOT, as some are trying to argue, a “continuity bill”. There is nothing "continuous" about Brexit. We are in new territory and we should be actually taking back control, not giving it away, for the sake of ourselves and the future of this country.

Some Conservative MPs are claiming that existing EU commitments are being replicated and the Trade Bill is business as normal. This is not reassuring.

Firstly, the new draft Free Trade Agreement with the EU, published in May this year, does not include protection for the NHS.

Secondly, what about future agreements? The Trade Bill is the only legislation that covers the UK’s approach to trade deals. This bill is the only chance available for MPs and their constituents to have democratic control over the content of future trade agreements. Amendments were added to previous versions of the same Bill (in the last parliament) which did cover new trade agreements – the same could be done here to guarantee our democratic scrutiny.

Finally, it’s worth noting that EU member states have democratic powers to approve EU trade bills that MPs are not giving themselves in the UK parliament. Why do we in the UK not give ourselves the same level of democracy as in the EU?

2) Protect our NHS from Trump

We need MPs to give themselves the powers of scrutiny so they can *guarantee* protection for our NHS as negotiations progress. Otherwise there will be nothing they can do to safeguard the future of our NHS in trade deals, after everything that nurses and doctors have done for us all in this pandemic.

Trump believes healthcare should be run by private companies and he initially said the NHS would be ‘on the table’ in trade deals before rowing back.

The US has more negotiating clout than us. Its economy is six times larger than the UK’s, and 13% of the UK’s exports are to the US, compared to only 3% of US exports to the UK. Meanwhile the US has some of the best-developed negotiating capacity in the world, having concluded 12 bilateral trade agreements and one multilateral agreement since 2000. The UK, on the other hand, is building its trade capacity for the first time in over 40 years, while attempting to forge its future relationship with the EU at the same time.

Safeguarding health is legally extremely complicated. If MPs are determined to keep the NHS safe they must give themselves powers to safeguard our health services in trade deals, powers to hold our government to account for negotiations with Trump and with other countries too.

3) Democracy and scrutiny - give us a say

We live in a democracy – there should be a presumption of transparency – with MPs, civil society and the public having the right to input.  “Public consultations”, “open briefings” and “updates for MPs and peers” are not enough when it comes to crucial trade bills that determine the future of our grandchildren.

Right now, government can negotiate trade agreements in secret, without transparency, public oversight or a vote in parliament. There is no guarantee of debate and it is not clear how MPs could raise objections. It is not technically possible for parliament to outright reject a trade agreement if the government wishes to persist. There is no role for the devolved administrations in scrutiny of trade agreements. While trade policy itself is reserved, many areas of policy that trade deals may impact on are devolved, for example: health, environment, food, farming, public procurement and the provision of public services.

This is urgent! Please write to your MP through our website or through https://www.theyworkforyou.com/ and write back using the information above if you get a reply.

Tell your Conservative MP: If you deny yourself of your powers of democratic scrutiny, you also take away all MY powers as your constituent to have any say – through your representation of me - over what happens next in this country. Ask them to defend our sovereignty and democracy and to actively safeguard our NHS for the future.

What is the purpose of Parliament if it is deprived of the right to scrutinise legislation, trade deals, military intervention, ministerial actions and any other actions proposed by the executive? How else can the public have faith in democracy?

NHS not for Sale!