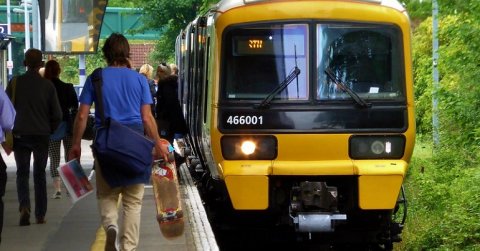 You may have heard last week that the government effectively nationalised the railways, but that’s not exactly true. Instead, private companies have been told to stay put with a 2% fee for all operations they run for the next 6 months, while the government takes all the risk. Private companies extract profit when they can, and the government steps in to maintain the system and take the fall when this is harder to do.

This is the latest of a string of attempts to prop up the failing system that is privatised railways. Since the sell offs, there have been 17 reviews and we expect another one this year. Yet still our railways are expensive, late and unreliable, while somehow £725 million is magicked up for shareholders every year.

Labour’s new White Paper spells out a vision for a publicly owned railway.

Here’s 5 ways their public ownership proposals will fix the biggest problems on our railways.

1. Money reinvested, instead of leaking into pockets

To put the £725 million in dividends into context, ‘the profit leakage could buy brand new trains for the whole of Merseyrail’s ancient fleet – every year – with more than enough left over to cover the entire operating subsidy to run them. Most of Britain’s train franchises are wholly or partly run by subsidiaries of other countries’ publicly owned rail companies, so profits are used to improve other countries’ publicly owned railways.

The fragmentation of the railways, where inefficiencies make the network disjointed and harder to use, costs a further £290 million per year.

Meanwhile, we still pay for rail improvements and the cost to the public purse has doubled since we privatised our railways.

In public ownership, over a billion a year would be available for reinvestment, instead of our railways being ‘a rich man’s toy’ as Philip Hammond said.

“Putting the railway back together under public ownership would allow for wholesale reform of fares and ticketing, replacing the current system with a simple, London-style ticketing system across the nation, delivering contactless payments and creating zonal rail fares that will apply across all modes of public transport.”

This is currently “blocked under the present rail structure by rival commercial interests and rules to protect the discredited concept of private competition on the railway.”

Anyone who has been to London recently knows their system is easily the most coherent and easy to use of the country. Our railways could easily be and should operate this way.

3. Finally, a network not a mess

GB Rail would be one company that can plan years ahead on expansion and make effective decisions across the network.

Track and train would come together to make an integrated network, instead of a game where people take a chunk of the network for a few years, wreck it, and hand it back to play a new section of the game, while the infrastructure holding it all together is left to crumble. The East Coast line in public ownership was hitting 94% satisfaction rates and had paid £1 billion to the treasury. It was privatised in 2015 and 4 years later, Virgin and Stagecoach asked to hand it back, avoiding £2 billion in franchise payments to the government.

A planned timetable will mean much better linking with bus and tram, necessary to achieve a network that will tackle the climate emergency by providing full A to B journeys.

Getting more freight travelling by rail will contribute to thriving economies and help to get more HGV off the road, which ‘creates major safety, social and environmental disbenefits’.

4. Locally accountable, not micromanaged from Whitehall

Public ownership will mean a lot less political interference that comes from governments trying to micro-manage a broken system, with interventions that don’t fix the wider problems affecting us day in, day out.

Instead, rail professionals can run the railways, getting the job done.

Local regions know their needs best. Devolved Transport Authorities will control both expenditure and governance within their areas. Liverpool has already bought some of the publicly owned trains it needs, allowing for unassisted wheelchair access.  And Manchester has called for more control over local rail services for some time.

Here’s how decision making is shared: with the government holding a majority of shares, regions will have the remaining. A two-tier structure means representatives of the devolved authorities, staff and passengers can have a say as members of a supervisory board, as used in companies in other European countries, as well as civil society organisations. Each member has a duty to operate for the long term interest of GB Rail to help the group work together as opposed to representing constituent groups only.

Workers will be involved in decision making processes, while also being employed by one company to allow for nationwide ‘pay, terms and conditions’, stopping a culture of undercutting wages, bringing the UK closer to the German model of industrial relations.

As it says in the proposals: “Rail workers should be collaboratively involved in how the railway is run, using their skills to improve the railway, not wasting their energies in battles over rail safety being compromised for added profit, substandard working conditions and exploitative job contracts.”

A passenger rights body, Passenger Voice, will be to keep the railway ‘representative of and accountable to passengers’, with independent funding and a presence in devolved regions. They could hold the organisation accountable on whether its achieving social and environmental objectives, like ‘Observatory’ that holds Paris’s publicly owned water company to account.

Franchises have been put on ‘life support’ instead of using this golden opportunity to do what the vast majority of citizens want: bring the railways back into public ownership.

For how long can we run rail lines as a vehicle for profit instead of for the benefit of the people, when coronavirus has proved that this government does have some capacity to make decisions for people instead of the market?

We’ll be calling for public ownership, now and when the time comes to end the current arrangement. For now, we thank Labour and especially Ian Taylor for his huge contribution to this exciting plan: a railway with people at its heart.

Read the proposals in full here

Shapps accused of blocking negotiations that could have averted rail strikes

Rachel Reeves confirms Labour has scrapped its commitment to public ownership of water, energy and railways