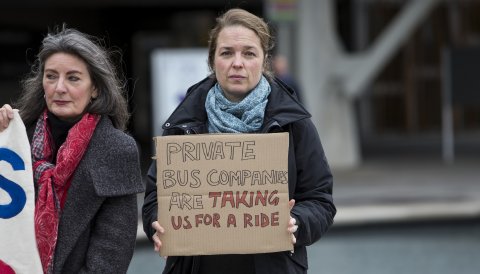 During the coronavirus crisis, buses are more vital than ever. Although many people are staying at home, getting key workers out is crucial. This pandemic has shown clearly what people already know: buses are a public service that should be run according to community needs.

It has also shown us something else we know: the way bus services are currently run means that bus companies take public money in the good times, and leak it as shareholder dividends (40% of bus companies’ revenue is public money). In the bad times, they take even more public money, regardless of whether they need it, with no thanks.

While bus companies originally asked for £1 billion, they have ‘welcomed’ a bailout of £400 million over the next three months. Why wouldn’t they? It’s a nice cushion. This £400 million is on top of the Bus Service Operators Grant which amounts to around £200 million a month. This makes £1 billion over the next three months alone. The Transport Secretary Grant Shapps has also written letters to local authorities to ‘urge them to continue payments for tendered bus services and concessionary fares reimbursement at pre-crisis levels’. This at a time when local authorities have also been asked to waive business rates, face increased pressure on their vital services, and a decade of austerity has left local authorities stripped bare.

And this is despite one company saying they retain ‘a strong balance sheet’, and Stagecoach issuing a ‘profit warning’ last week saying that they have “£290m of available cash and undrawn... to underpin the continuity of the business.”

Bus companies will be toasting today.

Bus companies taking us for a ride

Many will argue we had to bail them out, because the way our system currently runs means we have no control over the vast majority of services. If bus companies decide to stop running services, we would be at risk of having no transport for our key workers.

Bus companies have long cherry picked the most profitable routes and left entire communities isolated, while still managing to give out £1.49 billion worth of dividends to shareholders over the past ten years.

Therefore thinly veiled threats from the bus consortium, the Confederation of Passenger Transport work. As they put it themselves "without extra funding, the bus network outside London could disappear.”

A missed opportunity for a better system

This was a perfect opportunity to get, in exchange for these large sums, public control and ownership of our buses In Germany, public ownership is the norm - and in the UK, this would mean we save £506 million every year, with publicly owned networks like Edinburgh’s and Nottingham’s regularly returning millions to the public purse. This would prevent the need for bailouts in the future, making us more resilient. As Ellie Harrison said, when Get Glasgow Moving called for ‘buyouts not bailouts’:

“If our buses were publicly run then we would be saving money during a time of reduced services, instead it is costing us money.”

We could either have bought out companies, or requested a part stake in the companies in exchange for this money.

Furthermore, we could have demanded in return that all local authorities wanting to bring their buses into public control can. In Greater Manchester, bus companies have set up a consortium to specifically campaign against public control of buses going ahead. While London is allowed to have a 24 hour, reliable, affordable service, the rest of us are at the mercy of bus companies.

Coronavirus has shown bus privatisation is failing in new ways

Buses in public control and ownership would mean we could have full control of routes to meet each community's needs, fair fares including free fares for NHS workers (as Wales demanded in their bailout), and the strict nationwide cleaning standards we need right now on buses.

In Manchester, drivers spoke out about inadequate cleaning standards on Stagecoach buses, claiming that the company discouraged mask wearing, instead of distributing them, and were not regularly cleaning buses.

"I know we are supposed to be key workers but the company’s attitude towards staff is putting us at risk.

"I am worried sick.”

"I've had tremendous concern in the days gone by about bus drivers who are handling cash”.

Buses in public control and ownership would have allowed us to make effective decisions quickly so that we could have got citizens the service we need at this time  Managing the timetables to serve these workers, while not running endless empty buses (or encouraging travel), is a real challenge.

Coordinated planning across integrated networks in public control and ownership would allow for thorough cleaning standards, better, more integrated route planning, and the potential redeploying of drivers and vehicles to where they are needed so that all communities have a service.

Without proper planning, it leads to circumstances like a nurse saying that the reduced morning and evening services have left her paying £125 a week on taxis.

Or Arriva North West making the point very clear that they weren’t giving NHS free bus journeys as other companies were.

The reality is that this crisis has shown us that buses are a public service that keep the country running. Bus workers are heroes keeping this country going (and you can send a quick video clip of thanks here, as Better Buses for Greater Manchester have been asking people to do.)

Bus companies will continue to take public money as long as they can, offering a service that isn’t good enough as thanks.

We need public control and ownership of our buses now and we will continue to call for this, because our communities deserve better than this.

I work in the industry they are money mad waste millions on vanity projects and blame the workers for costing money.

This should never been privatised in the first place. It was a disgrace!

I was told that buses would stay running during the coronavirus crisis to support key workers. I've now discovered that the reality of that is that the buses that I need to get to work (I work nights in a care setting) stop running at just after 7pm - two hours before my night-shift begins - they haven't even thought about shift changeover times for care workers!