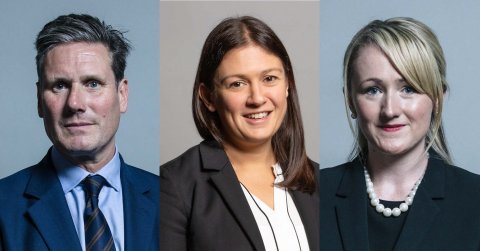 People want to see an end to privatisation of our public services. And people need politicians who will commit to ending it. Not least because it would save us billions.

That's why we asked all the candidates seeking to be the next Labour leader where they stood on public ownership of ten key sectors earlier this year.  All three of the candidates who made it onto the ballot - Keir Starmer, Lisa Nandy and Rebecca Long-Bailey committed to all ten of our pledges for public ownership of schools, the NHS, railways, buses, energy, water, broadband, the justice system, council services and the Royal Mail.

Since then, public ownership has featured heavily in the leadership campaign. But we're now seeking some clarity from the candidates as to their understanding of public ownership and how they would prioritise it.

After releasing our pledges, Keir Starmer has made "common ownership of rail, mail, energy and water" one of his 'ten pledges' in his campaign. We're unclear as to what Starmer means by "common" ownership, and how he distinguishes this from public ownership.

Lisa Nandy said in a debate on Newsnight that "We cannot carry on going around as a party making promises to nationalise everything". We asked her for clarification on this, and she subsequently published an article in the Independent, in which she argued for "prioritisation" when it comes to public ownership.

We believe that public ownership has to be a priority for the next Labour leader, and that it can't slip down the political agenda. That's why we've asked each of the candidates to make a short video setting out what public ownership means to them, how they would prioritise it, and why they support it.

We'll be publishing these videos in the coming weeks. So if you haven't yet made up your mind who to vote for, watch this space for the candidates' positions on public ownership - in their own words!

Rebecca Long Bailey has made her commitment to public ownership clear, and has not made any comments since making our pledges that have required clarification. Lisa Nandy and Kier Stamer have both made statements after signing the pledges that have called their commitment to the pledges into question, or contradicted the pledges, which is why we are asking them for further comment. We have also reached our to Rebecca Long Bailey to give her the opportunity to talk about her vision for public ownership, and are hoping to share this before the ballots close.

I hope that this explains why this piece is focused on Nandy and Starmer.

Alice (and the We Own It team)

I'm glad I'm not the only one to have noticed Starmer's carefully chosen words common ownership. The fact he used these words speaks volumes. As a Queens Counsel he chooses his words very carefully indeed.

I have already voted for Kier Starmer and Angela Rayner - so this is too late for me.