East Coast campaign update: What next? 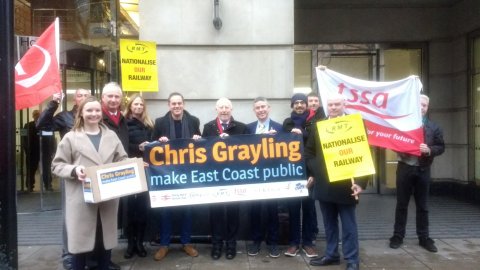 Thank you so much for all your support for our campaign to make the East Coast line public! We handed in a petition to the Department for Transport with nearly 30,000 of your signatures last Tuesday (20th February).  If you haven't signed it yet, every signature still counts! You can sign here.

You also sent nearly 4,000 emails to MPs asking them to write to Chris Grayling and urge him to bring the East Coast line into public ownership, and it worked! Layla Moran, Lib Dem MP, wrote to Grayling almost immediately, followed by Anneliese Dodd (Labour) and Liz Truss (Conservative). Even Tory MPs are responding positively to these emails, which just shows how popular public ownership of the railways is. Again, if you haven't done this yet, please do! Its really important to keep up the pressure to keep Grayling on his toes. Take action here.

(More MPs may have written or spoken to Grayling that we're not aware of. Plenty of Labour and SNP MPs asked questions in the House of Commons relating to the East Coast franchise on Thursday 1st March.)

We were joined by Andy McDonald and Daniel Zeichner, Labour MPs, Alan Brown, SNP MP, and Jonathan Bartley, Green Party co-leader, as well as activists from RMT, Momentum, TSSA, TUC and Unite! The petition was also supported and promoted by the wonderful UK Uncut, Bring Back British Rail, Compass, and trade unions ITF and ASLEF.

This means we now have support from all the major parties (apart from the Conservatives, of course). That’s fantastic! True cross party support to match the huge public support for public ownership.
Even better, the Public Accounts Committee (PAC) and the Transport Select Committee in Parliament are both holding their own inquiries into Grayling’s decision over the East Coast, and into why the franchise failed.

We heard from the boss of Stagecoach on Monday that the failure of the franchise was down to ‘political uncertainty’ - he blamed everything from Brexit to the Manchester Arena bombing. The one thing he couldn’t blame, though, was Network Rail.
Since the campaign began, we’ve heard that the franchise didn’t make enough money because the publicly owned Network Rail failed to deliver the improvements it had promised to the infrastructure of the line.
But Mark Carne, the head of Network Rail, confirmed to the PAC on Monday that Network Rail had in fact delivered all of its promised infrastructure improvements, on schedule! Stagecoach and Virgin have run out of excuses.

We acted fast last week because we had reason to believe that Grayling would make a decision in a matter of weeks - and it may still be very soon! However, we’ve since heard from the head of the Department for Transport, Bernadette Kelly, that the timeline is more likely to be a couple of months, not weeks. So we’re regrouping this week and taking some time to figure out what the best next step will be.
We’d like to get the SNP involved in putting pressure on Grayling, and we’d like to buy a share in Stagecoach and turn up to their shareholder meetings! We might take a trip to Grayling’s constituency in Epsom and Ewell - so if you’re from near there, we might need your help!
We’re exploring all the options, and will be in touch very soon with a game plan.
THANK YOU for your help so far - we couldn’t do any of this without you.

Please keep up the good work I support you 100% I am from the North East but now live in East Anglia so use the East Coast line to visit family. I used to use it more often prior to the privatisation as it was a good and reasonably priced service. Since it was privatised it is not so good and is much more expensive. I have noticed very few people using Ist class as it is not good value for money any longer and is very expensive. I sincerely hope you are successful both for passengers staff and this country. It was making a profit and they sold it why????

Public ownership is undoubtedly the best for the East Coast main line. Let's bring it back in-house.

Great to see you on Renegade Inc (R.T) to promote the cause for Public Ownership of the rail network and the wider benefits of bringing all public utilities and services into the public domain.

Stagecoach and Virgin Trains blame everyone but themselves for failing to make the big profits they expected. They are only interested in making excessive amounts of money, so they can pay large dividends to shareholders.

The railways, water industry, and electricity should be publicly owned, for the mutual benefit for the whole people of Britain; not for the few who are only interested in using them to "get rich quick".

And as for the Conservative's Policy of dumping everything that the European Union offers, which could empty the UK supermarket shelves, as well as causing massive unemployment in our exporting industries, we should sentence the Conservatives to "Volunteer" to assist the UK Farmers harvest their crops because Brexit has frightened off 3,400 Eastern European Farm Labourers from coming to work in the UK leaving the fruits and vegetables rotting on their bushes. Be prepared to answer the Farmers' question where shall they get their farm labouring staff in future. Paul

Well said. And the ongoing confused matter of Brexit is suffocating government from doing anything for this country's good.

Hi it's me, I am also visiting this site regularly, this web page is in fact pleasant and the people are truly sharing fastidious thoughts. http://mccormickfuneralhome.net/obit/2016/guest/dmeyer.php

Have you forgotten the referendum Paul Bunting, Leaving the EU was not conservative party policy it was what the public wanted

A very good idea - purchasing a share in Stagecoach. It's time people stood up to major SNP donor Brian Souter and his bullying tactics.

Great stuff! But unfortunately buying a share in Stagecoach would not entitle you to turn up at board meetings (only general meetings of shareholders, such as the AGM). Also Chris Grayling's constituency is Epsom and Ewell (not Ewing).

We can follow the German example and make public transport free, it would help control air quality, because many car journeys would be avoided. We could also follow their example of 28hr (4 day) week that would also reduce car journeys.

That's rather interesting Margaret, but how about this: my research indicates that 'Arriva Trains' and 'Arriva Buses' are a subsidiary of 'Deutsche Bahn' with headquarters in Berlin - but if course they wouldn't put that on the sides of our buses and trains would they! According to Wikipedia 'Deutsche Bahn' is a 'private joint-stock company with the Federal Republic of Germany being its single shareholder.' Hold on though... isn't that nationalisation of our British assets by a foreign country?!!

In what part of Germany is public transport free? Wherever I have travelled in Germany you have to buy a ticket.

Don't undermine your credibility by getting simple facts wrong. Grayling's constituency is Epsom and Ewell.

I can't offer money, but I can offer time/work. I live near Durham. Any use?

That's lovely of you to offer, thank you! Could you email info@weownit.org.uk with your availability and what sort of volunteering you'd like to do? We might not have any opportunities at the moment, but we're looking into setting up a group of informal volunteers to help us spread our posts on social media, or represent us at local meetings and conferences that we can't get to. We haven't finalised these plans yet, but if you send us an email we'll make sure you hear about it when we do.

Buying a token share to attend AGMs or other general meetings is a tried and tested tactic used by trade unions and the public not just to attend these meetings, but to create mayhem once you get in. Lots of nice publicity/photos as security guards wrestle peaceful protesters to the ground.

I sent the email to my local MP, Martin Vickers, a completely "dyed in the wool" tory and knew what his reply would be before I even received it. And, yes, how wonderful private ownership is and how bad it was in the old days of BR. When I had previously tackled him on this, his reply was that the only reason that East Coast - the publicly owned rail franchise - worked, was due to the government subsidies and Network Rail charging East Coast at a special rate. But, all the operators of rail transport receive massive subsidies from the government - the only reason that East Coast was sold off is because it was making a profit - for us and not the fat cats bank balances!!

So, my local MP - Vickers - will NOT be supporting this move. I never voted for him anyway!!

Thank you for the communication,we have to keep up the pressure as many now seeing that they are having to pay through the nose to satisfy the shareholder at a time of falling wages and rising prices.

What did Network Rail actually do or not do ? There was some talk about increasing the 25kV power supply to allow more powerful new trains.There may also be some track improvements.

One school of thought is that what matters is having the tracks and trains under one management not who owns the shares.

The problem with nationalisation has always been tight treasury control of borrowing for capital investment. It is sound in political theory but difficult in practce.

Free public transport is occasionally advocated in urban areas. The ECML approaches commercial viability , so free travel would cost a lot of Taxpayer's Money. I don't think much trnsport in Germany is free but they are not so worried about showing a profit. One suggestion was that the losses on buses and trams were subsidised by the profits from municipal gas and elecricity.

I have sent Anna Soubry MP an email because she made such a pathetic contribution to the R4 Any Question debate on privatised public services last Friday. She basically said "privatised services are always better" and "don't forget those BR sandwiches". The We Own It website is such a fantastic source of information about successful services run by the public sector and I quoted much of it to her.

I have sent Anna Soubry MP an email because she made such a pathetic contribution to the R4 Any Question debate on privatised public services last Friday. She basically said "privatised services are always better" and "don't forget those BR sandwiches". The We Own It website is such a fantastic source of information about successful services run by the public sector and I quoted much of it to her.

Thanks Robert! Very good to hear and well done!