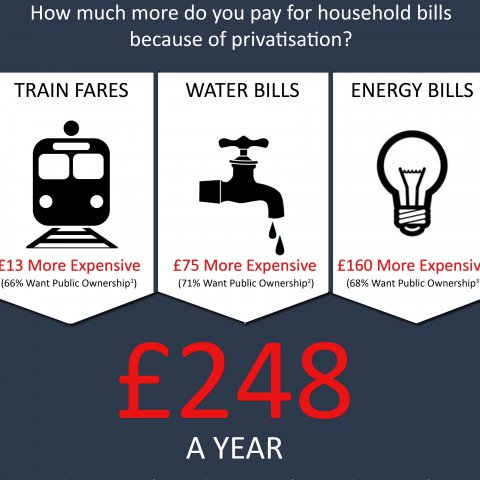 New research from Corporate Watch and We Own It has revealed the 'cost of privatised living'. The research looks at the cost of energy and water bills and rail fares and finds that households would save around £250 a year if energy, water and rail were in public ownership.

Savings would be made both from shareholder profits not being paid, and from the fact that government can borrow more cheaply than private companies to raise the money needed to invest in the services.

Together, the private energy, water and rail companies paid out £12.7 billion to investors in 2013, in line with pay-outs from previous years. If the services went public £6.5 billion would be saved in total: £4.2 billion from energy, £2 billion from water and £352 million from the railways.

Households would save more than £160 on electricity and gas, £75 on water and £13 on rail (click to see infographic).

Actual savings of going public would likely be higher as the costs involved in regulating and outsourcing these services could be reduced. Recent studies have shown there is scant evidence that utilities are run more efficiently by private companies than by public bodies.

Prices have been outstripping inflation. Between 2007 and 2013, household gas and electricity bills rose in real terms by around 41% and 20% respectively. In real terms, water bills have increased by 50% since privatisation, while rail fares are 23% higher than they were in 1995.

Owners of the companies include some of the richest people in the world, banks, investors and foreign governments.

Cat Hobbs, Director of We Own It said: 'Households are getting squeezed by ever rising train ticket prices, energy bills and water bills, while incomes can't keep pace. Politicians talk about the cost of living, but it's time to look at the cost of privatised living. Privatisation is a failed experiment while public ownership could be a much more efficient alternative. We could run these services ourselves and save money, either for households or for government.'

This research comes just after the government decided to reprivatise the East Coast railway line which returned £1 billion to the Treasury during its time in public ownership.