The fight against water privatisation in Europe 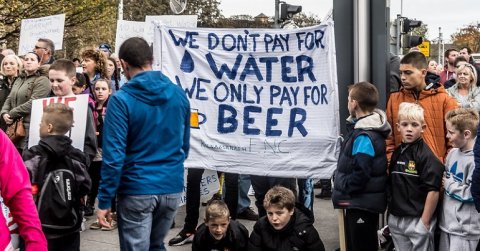 Capitalism is characterised by relentless structural pressures towards constant outward expansion. It strives to submit ever more areas to market forces and profit-making. Water is no exception in this respect. Whether it is the expropriation of water for the extractive industry or bottled water, or the privatisation of public water and sanitation services, capitalism is constantly striving to transform water into a commodity, which can be bought and sold for a profit. My new book Fighting for Water: Resisting Privatization in Europe (Zed Books/Bloomsbury, 2021), however, is not about the power of capital and its all destructive dynamics. This book is about successful resistance against water privatisation. It is about the power of collective action and the possibilities of constructing alternatives.

Importantly, these struggles should not be understood as isolated, individual moments of contestation. Throughout the book, I indicate how struggles in one locale, in one particular country impacted on struggles elsewhere. When privatisation of water started in some towns in central Italy in the late 1990s and early 2000s, consumers were almost immediately hit by drastic increases in water charges of over 100 per cent. In response, resistance started to emerge around local water committees. When they encountered water activists from Latin America and other parts of the world at the first Alternative World Water Summit in Florence/Italy in 2003, Italian activists realised that their local struggles are part of a wider pattern. They moved towards establishing the Italian Forum of Water Movements at the national level in 2006, which became the organisational basis for the successful mobilisation in the referendum on water privatisation in 2011, when Italian citizens rejected water privatisation by a large majority.

In turn, the success of the Italian water movement in the 2011 referendum encouraged the European Federation of Public Service Unions (EPSU) to organise the first European Citizens’ Initiative (ECI) ‘Water and Sanitation are a Human Right’ in 2012, collecting close to 1.9 million signatures in 2012 and 2013. When water activists from the Greek city of Thessaloniki followed the hearing of the ECI outcome in the European Parliament (EP) via video link in 2014, these activists decided that they too would organise a referendum in their city in support of public water. The rejection of privatisation was overwhelming. On 18 May 2014, 98 per cent of participating citizens voted in favour of keeping water in public hands. Ireland came rather late to the struggles over water in the EU. It was only in 2014, when the Irish government established a national water company and started to roll out a programme of installing water meters – perceived by many as the first steps towards privatisation – that activists mobilised. Large demonstrations, a non-payment campaign of water charges and civil disobedience in the active blocking of the installation of water meters proved to be a powerful set of strategies, which ultimately led to the suspension of water charges in 2016.

Nevertheless, it is not only the successful resistance against privatisation, which marks these campaigns. It is also the development of potential alternatives of how water can be managed differently, which is a major contribution of these moments of collective action. Water activists in Italy realised early on that simply putting forward the state or local municipality as the better way of managing water would not be sufficient. The idea that the public can be an efficient provider of services such as water had suffered in Italy prior to privatisation. Simply arguing that the public is better would not have worked. Hence, activists focused on treating water as a commons, something which should be jointly managed, jointly used and jointly preserved for future generations, as an alternative to both private management and its focus on profit-making as well as public management by technocrats. This focus was combined with a new, participatory form of democracy in the running of water services. Precisely in a situation perceived by some within the water movement as post-democratic, the focus on a new form of democracy proved attractive. “It is written water, it is read democracy” was a key slogan of the campaign.

While a focus on the commons was of importance in struggles against water privatisation in Thessaloniki/Greece, it did not gain wider traction during the European Citizens Initiative across Europe and struggles against water charges in Ireland. What has, however, materialised in all these struggles is a quest for a different kind of democracy, which facilitates the direct involvement of people in decision-making. Be it in relation to a democratisation of how water companies are managed via the participation of workers and water users, be it in relation to more general decision-making in society, what has characterised all the struggles covered in the book is a rejection of representative democracy, often perceived to facilitate a continuation of existing capitalist structures of exploitation, and a demand for direct, participatory forms of democracy. It is in this respect, linking forms of democracy to the way of how the economy is organised, that we can identify a potential for transformation beyond capitalism.

An online book launch will be hosted by the Five Leaves Bookshop, Nottingham, on 7 July. You can register for the launch here.

Andreas Bieler is Professor of Political Economy in the School of Politics and International Relations and Fellow of the Centre for the Study of Social and Global Justice (CSSGJ) at the University of Nottingham, UK. He is author of Global Capitalism, Global War, Global Crisis (together with Adam D. Morton) (CUP, 2018) and Fighting for Water: Resisting Privatization in Europe (Zed Books/Bloomsbury, 2021).

Thames Water had no borrowings. It borrowed billions & paid it out to shareholders, who are left to pay the interest as part of Water Bills!

Why cant we take the company to court?