The fight to protect the NHS in Oxfordshire 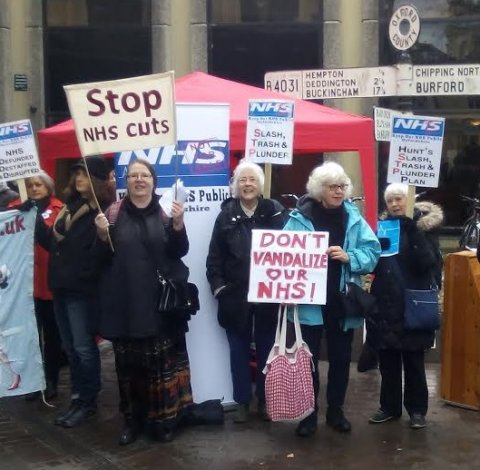 Amelia Schofield reports back on the local campaign against the 'Slash, Trash and Privatise' plans (STPs).

Yesterday We Own It joined NHS campaigners at Oxfordshire County Council to try to stop the underfunding and privatisation of our NHS that would happen if the so-called Sustainability and Transformation Plans (STPs) are passed by councillors. We attended the Health Overview and Scrutiny Committee to find out more about the STPs and how we can work together to stop them.

‘Sustainability’ and ‘transformation’ are both words which sound good but are being used to hide a dangerous reality for our NHS: cuts and privatisation of public healthcare. The government is asking the NHS to reduce its spending at a time when, particularly with an ageing population, demand for NHS services is increasing rapidly. STPs are part of this cost-cutting process and feature plans to merge and reduce healthcare provision, threatening to halve the number of A&E departments in England. As Dr Liz Peretz from Keep Our NHS Public stated, ‘you can’t cut demand in health, you can just increase suffering’. As the NHS is put under greater pressure, STPs will encourage the private sector to get more involved in our healthcare system and promote the use of private companies as an alternative way of delivering services.

Advocates of STPs at the meeting spoke of the need for ‘efficiency’ – a word associated with, and promoted by, the private sector. However, in 2014 a report by the Commonwealth Fund showed that the NHS was one of the most efficient and best healthcare systems in the world. In contrast, private healthcare in the United States was one of the world’s most expensive yet least effective healthcare systems. If the NHS is already an effective system of healthcare, then why do we need STPs? The answer is: we don’t.

One of the main problems with STPs is that hardly anyone knows what they are. This is not surprising seeing as the plans for STPs across the country have been kept hidden from the public. At the meeting, the local STP Oversight Group presented a timetable for the discussion and implementation of STPs. Only in the final stage – once STPs have been passed by councils – will public opinion be considered, and, even then, this would only be ‘public consultation where required’. This shows how the future of our National Health Service is being kept hidden from us, the public, who pay for and rely on its services.

Public healthcare provision in England works well but is suffering from staff shortages and underfunding. STPs will only make these problems worse and threaten the survival of our public health service. However, you can help to stop STPs and protect our NHS. Between now and Christmas, councils across the country will be reviewing STPs and have the power to stop these plans. We need our councillors to act now to protect our NHS and keep it public.

Wow, great article. Thank you for making us aware! Keep up the really great work.

A great explanation of how important this issue is. I will definitely get involved.

We need to raise awareness about this issue urgently.

The Leaders of Hammersmith and Ealing Councils ARE standing up for their residents and refusing to sign the NW London STP. They are protecting the local A&Es and 500+ acute beds at Charing Cross and Ealing Hospitals.

For anyone who wants to learn how to resist: come to our meeting on Tuesday 29th November at 7.30pm at Hammersmith Town Hall: "Save Our Hospitals".

(also our website: www.saveourhospitals.net - campaigning to save Charing Cross and Ealing Hospitals and to re-instate A&Es at Hammersmith and Central Middlesex hospitals)