The Great NHS Heist: Exposing a crime against the nation 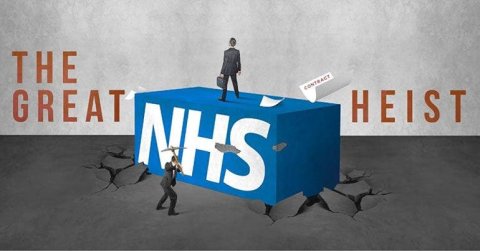 Working as a General Practitioner in South-East England for over two decades, I have experienced the effects of the stealth ideological assault on the NHS. De-funding, outsourcing and marketisation has squandered billions, made my job harder and for my patients more frustrating with delays, fragmentation and in some cases preventable harm. The local Queen Mary's Hospital in Sidcup, had been downgraded with the closure of its A&E department, maternity unit, acute medical and surgical services. It rapidly became clear to me that bed capacity could not meet necessary demand and many patients were not getting timely and safe care. In 2012, on the back of these cuts, came the announcement of plans to downgrade another hospital just a few miles away in Lewisham, spurring me to join the campaign to defend this new target against a dangerous assault. How on earth did it make any sense to further reduce medical services with the population growing and need increasing?

In the years leading up to making The Great NHS Heist, it became clear that fundamental information was being kept out of the public domain. The parliamentary system was broken. We had endured four decades of neoliberal policies supported, enacted but not explained by all three main political parties. Waiting for politicians to come to the rescue was wishful thinking. Mainstream media simply perpetuated public ignorance about what was really going on.

Successive reforms went ahead without meaningful scrutiny, camouflaged in marketing spin and buzz words with consistent regurgitation and the spectacle parliamentary pantomime on our screens. Observing the narrow and shallow debate around health policy after learning much about the reality soon shattered any illusions of having an open democracy with a functional fourth estate. Having produced Sell Off in 2014 fellow campaigners persuaded me to produce another film to paint an updated picture of the future for the NHS and the trajectory to replicating the American corporate dominated nightmare.

Our goal was to explain how far the NHS had been mutated from its original public service function and reveal the destination to be the US-style for-profit healthcare. A system designed to deliver grotesque profits by avoiding sick patients, denial of care, financial and bureaucratic barriers to access and outright fraud.

With filmmaker Drew McFadyen and support from a core group of health campaigners, we embarked on producing this crowdfunded film. There have been many challenges not least to weave together analysis of the history, legislation, tactics and implications of the privatisation plan but we were determined to make a robust factual and engaging documentary. Experts from the UK and USA combined with NHS staff and patients provided powerful testimony to reveal the crime of the century.

The Thatcher privatisation plan relied on stealth, secrecy and cross-party support. A market bureaucracy facilitated outsourcing and transfer of power away from clinicians to a bloated managerial tier designed to impose change without question or concern for the consequences. The NHS was slowly prepared for asset stripping. To its staff, patients and the public, the NHS represents a respected institution delivering healthcare to the sick irrespective of income, based on medical need. Unknown to most, it had been moulded into a corporate structure with a business ethos under cover of the completely false ‘efficiency’ rubric, patiently over the preceding forty years.

Patients will find it harder to access the care they need having to negotiate a minefield of administrative and bureaucratic hurdles. The comprehensive range of NHS services salami sliced down to a remnant of poor standard emergency care in fewer locations. For non-urgent care the choices will be to go without treatment, pay out of pocket or buy top-up insurance. A two-tier system that will be lower quality, more expensive, bureaucratic, with perverse incentives that damage professionalism, patients, tax-payers and the privately insured who risk claims being denied or capped, as we see clearly in America.

People should be in no doubt that a tax-funded, publicly delivered system like the NHS is of fundamental importance to rich and poor alike. The coronavirus pandemic so catastrophically managed by our government that remains ideologically determined to continue its deadly objective of a fully Americanised health system.

The NHS must be re-nationalised and excluded from a US-UK trade deal which would lock-in privatisation. A critical mass of determined and organised people must resist what is being done to our NHS. The Great NHS Heist is a call to action in the fight against the neoliberal assault on our vital public service. Bold and effective tactics have to be deployed to raise awareness and have an impact on high profile companies like Virgin and Boots that are profiteering from the demise of the NHS. Education and support of NHS staff in effective resistance to imposed destructive changes, non-violent direct action, social media campaigning and political pressure all need to be mobilised to pull us back from the brink.

Bob Gill is an NHS doctor and producer of The Great NHS Heist documentary.

I already understood the crisis the NHS was in due to successive government underfunding and outsourcing to private companies. Even including the Labour Party (The party for so called working classes?) under Blair! What l don’t know is what to do to stop it as all major parties seem he’ll bent on destroying the NHS purely for profit as far as l can see?

This message rings bell with me for three reasons.

First, a cousin on my paternal side, Sir John Michael Kenneth HAWTON, was knighted for his role in establishing the NHS.

I'm particularly proud of this feature of my family history.

Secondly, a cousin on my maternal side, Sir Henry Britten BRACKENBURY, was an enthusiast, even before the establishment of the NHS:-

Thirdly, I have lived in Sidcup for many years and am therefore well aware of the local problems described by Dr Bob Gill.

I deplore the tactics outlined by Dr Gill and although there is little I can personally do to stop the rot, I fervently

believe it needs to be stopped without delay.

Too many people making money in the private sector and not able to it properly. All this money is being diverted from the service we pay for. Its now beyond saving unless something is done now.

I hope enough people realise what is happening by the next general election, I hope they care enough to do something about it. I hope there is a party that can bring the NHS back from the brink and I hope it is not too late.

We have seen the dreadful errors made by the govt over stocking PPE and privatisation of affected services which have been dreadful.

I totally agree with this statement.

We must renationalise the NHS

Government should stop attacking the nhs and listen to the people. We are not America or American and we don’t intend to be!

The above is essential to the well being of all

Thank you Dr Bob Gill for this comprehensive enlightenment on the deeply worrying situation. It’s good to see the real perspective even though it’s not what we want to see. Hopefully the spread of this information might help galvanise objection into finding effective ways to prevent it happening.

OUR NHS is worth fighting for

This is so true.

I have just become a public governor and I believe in the NHS being free at the point of contact.I also believe that any services that have already been privatized need to be bought back into the NHS.Illness is not an indulgence it is a misfortune which no one should be penalized financially or in any other way.

Thank you for your work on this.

Getting this out to the public has been and still is very difficult.

Some claims only tell half the story about what’s going on in the health service.

Claim 1: The Conservatives “are able to give the NHS the biggest cash boost in its history”

In 2018, the government announced that an extra £33.9 billion will be made available to the NHS in 2023-24. Not accounting for inflation, this is indeed the biggest single cash budget increase for the NHS announced by any government.

But that’s not quite as amazing as it sounds.

Governments almost always increase spending on the NHS year-on-year, and because the value of money almost always falls due to inflation, next year’s total will almost certainly be bigger than the year before in cash terms. So it’s pretty easy to have broken the previous record every year.

That’s why NHS economists insist on talking about funding in real terms, and they often judge governments by the pace at which they are increasing health spending – the annual growth rate.

Mrs May didn’t mention that since taking office in 2010, the Conservatives have been more parsimonious with the NHS than the last government.

Looking further back, the Institute for Fiscal Studies (IFS) says that health spending growth under the first six years of Conservative rule was “substantially below” the historic average between 1955 and 2016, when budgets grew by 4.1 per cent a year.

That extra cash promised by Mrs May will take the annual increase to 3.4 per cent between 2018-19 and 2022-23. This is more generous than previously planned but not particularly impressive in historical terms.

The independent King’s Fund think tank says the money pledged is in line with the “minimum increase needed to maintain quality and access to care given the growing and ageing population and rising burden of chronic disease”.

We looked at these figures in more detail in 2018.

Claim 2: “And who were the only party in government that cut funding for the NHS? The Labour party”

She compared that figure with the amount the Conservatives have promised to spend in 2023-24. As we have seen, in cash terms that sum is an extra £33.9 billion. In real terms – adjusting for inflation, it is indeed just over £20 billion.

Clearly, £20 billion is more than £7 billion, but this is an apples-and-oranges comparison.

Labour’s 2017 manifesto never said what they would spend in 2023-24 – the figures they put out referred to earlier years.

And Labour’s policy was to add £7 billion a year on top of what the government had already committed in plans made in 2015. It’s not clear that the £7 billion and £20 billion figures are starting from the same baseline.

It’s fair to say that Labour have changed their tune on NHS funding. In 2017, they pledged to increase budgets by 2 per cent a year on average, but lambasted the Conservatives in 2018 when the government announced what Labour called an “insufficient” boost of 3.4 per cent.

But Labour have now upped their offer. In 2018, the day after the government’s announcement, Labour promised to increase NHS spending by 5 per cent a year. So the Labour spending promise Mrs May referred to is now out of date.