How Cornish activists turned back the tide on outsourcing and privatisation

In the last twelve months activists and campaigners from across the Cornwall have united to fight the sell off of NHS services to the private sector. Neil Foss explains the ups and downs - and how they won significant victories for public services.

This is the story of our fight.

Twelve months ago 38 Degrees campaign group started getting members to organise into local groups to campaign on local issues and get involved in the general election build up.

A few people in various parts of Cornwall got connected and talking about county issues as well as local ones. Meetings were set up in various parliamentary constituencies including Penzance.

More than thirty people attended the Penzance meeting. Local issues were discussed and plans for campaigning and election hustings were formulated. As leader of the group I also kept in constant contact with the other group leaders and NHS privatisation in Cornwall became a countywide issue due to the media reporting of plans for Royal Cornwall Hospital Trust (Treliske) in Truro to advertise tendering for three services: the pathology lab, sterile services and IT.

One of the groups in Cornwall started a petition and we all promoted it, collecting a few thousand signatures in the end.

At a meeting of the Penzance group a plan was formulated to protest outside meetings of the Treliske board every month starting in March. With the help of the liaison officer the media were informed, protest materials were supplied and groups across Cornwall invited.

This brought us into contact with Keep Our NHS Public and a joint campaign agreed.

In March we all met up outside the board meeting and got widespread coverage across the county and even regionally. At least a hundred people turned up and staff from the hospital joined us on their breaks. The protest even made it on to the BBC!

Flushed with success at our coverage and support we repeated the protest outside the April meeting. A delegation went into the meeting and presented our petition. Our presence appeared to be having an impact as the board announced the suspension of the tendering process.

To date the services remain with the trust and not a private company.

Alongside this we were also planning our election campaign. We attended local hustings and asked questions on issues like welfare, the NHS and tax dodgers. We were contacted by St Ives residents upset at having no local hustings and we organised one for them.

We also got 38 Degrees to fund a shop for a few weeks before the election in Penzance (the only local group to do this).

Unfortunately, the election result was a totally unexpected win for the Tories. We were demoralised and disappointed. The shop shut. Activity dwindled.

In July adult healthcare in Cornwall was in the local news as the provider, Peninsular Community Health, was in financial difficulty and the contract looked likely to go out to tender.

We organised demos and protests outside as many of Cornwalls community hospitals as we could, and began collecting signatures for a petition against having another private provider and asking for Cornwall NHS to take it back in house. This seemed particularly necessary to provide a joined up health and social care service across the county which would inevitably be made more difficult if adult health went to a private provider. (Alongside we also did the TTIP petition too, and handed that in to our MP as part of  European wide action against TTIP).

By late October we were hearing that the CCG were appointing ‘preferred bidder’ status to NHS Cornwall for the adult services. And it has been confirmed recently that they are taking on the services from April 2016.

Its been a busy twelve months. Lots of people across the county are giving their time to organise and support protests, demonstrations and other actions to keep our NHS in public hands. We will continue to do this as long as it is needed.

Well done, I wish we could get something like that going in my area East Kent.

Heartening to read of your success. Well done. 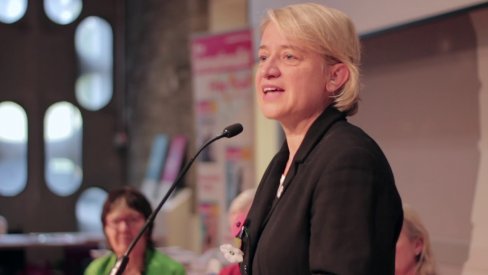