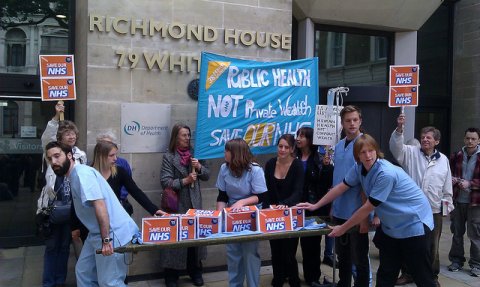 Gloucestershire NHS campaigners have been celebrating victory as Gloucestershire Primary Care Trust (PCT) has announced that the county’s eight community hospitals and health services (including 3000 nurses and other health workers) will remain in the NHS – reversing an earlier decision to outsource services. The transfer was halted earlier this year after a High Court challenge by 76-year old Michael Lloyd of Stroud which forced the Primary Care Trust to go back to the drawing board.

On 15 October, the board of NHS Gloucestershire agreed instead to create a new standalone NHS Trust - and to reject the alternative option of putting health services out to tender, open to private sector takeover bids. The decision also means that the hospital buildings will stay in the NHS rather than be transferred to a new company, PropCo, and staff will not be forced into the SW Pay Cartel.

What is the significance for activists elsewhere?

At a time when many parts of the NHS are rapidly being tendered and taken over by private companies like Virgin and Serco, and when concern about the consequences of the government’s health ‘reforms’ is increasing at the highest levels, this outcome has significant national implications.

Firstly, it shows that outsourcing can be halted, even late in the day, if there is enough political will.  When NHS Gloucestershire finally consulted staff and the public (possibly the first time such a clear cut choice has been offered in a consultation), the results were, as the PCT itself admitted, ‘overwhelming’. 91% of staff, and 96% of the public, voted for the services to be run by an NHS Trust rather than be put out to tender.

Secondly, the actions of the PCT show that there are – still - no legal hurdles (domestic or EU) to local health bosses keeping services in house, without tender – something that has also been confirmed in writing by government. Indeed, David Lock QC has argued that the case shows that keeping services in the NHS (without tendering), is an option that commissioners should always consider, first. And the promise of freedom not to have to offer services to the private sector, has since been extended to the Clinical Commissioning Groups soon to take over health budgets – if CCGs are bold enough to hold government to it.

But of course there is heavy, often secretive political pressure from above to privatise (either through tendering, or through ‘Any Qualified Provider’) - and to do so as quietly as possible.  As a result, health bosses aren’t always quick to admit the amount of discretion they do have. It is more likely that health bosses will stand up for the NHS if they are under pressure from their local community and health workers.  Campaigners can encourage health bosses to use the promises of ‘patients first’ and ‘clinically led’ to insist on having the right to keep services public, if people feel that is best (see the False Economy campaign guide for more details).

Lastly, the success of the campaign shows that even where there are administrative hurdles, political pressure can overturn these, too. So in May, health ministers conceded, and the PCT accepted,  what campaigners had always argued - that creating an NHS Trust to house community services was an option, despite an earlier missed deadline.

The government was keen to stress that Gloucestershire was an ‘exceptional’ case.  But if government can make an exception for Gloucestershire, why not elsewhere? As David Lock, the QC who represented Michael Lloyd in court, said the decision to set up a standalone NHS Trust at this stage represents a ‘potential policy shift’ which could be of particular significance for community services (district hospitals, health visitors, and so on) elsewhere, some of whom are in temporary contracts and may otherwise have faced re-tendering. But this shift will only happen, if campaigners push for it.

What do campaigners say?

Michael Lloyd, the retired Stroud railwayman who obtained legal aid to take the case, said “I am delighted by this decision. We cannot allow a return to the fear and poverty that ill health brought before the NHS existed.  Our NHS is too precious to be handed over to anyone on a political whim, nor should it have to compete against private providers, who are only interested in their profits.”

James Beecher, chair of Stroud Against the Cuts, emphasised that local political campaigning, as much as the legal challenge, was decisive, saying “We would like to thank the tens of thousands of people in Gloucestershire who have contributed to this victory, by marching, filling in consultations and petitions, attending meetings, contributing financially, and helping countless other ways. We also owe a huge debt to the brave members of staff and trade unionists who spoke out, to the national campaigners like Keep Our NHS Public who have supported us, and most of all to Mr Lloyd, without whom, all these NHS staff and local hospitals would have already left the NHS.”

Caroline Molloy - Stroud Against the Cuts

This blog was originally published on False Economy and is reprinted with their kind permission. Photo used under Creative Commons licensing, thanks to 38 Degrees.