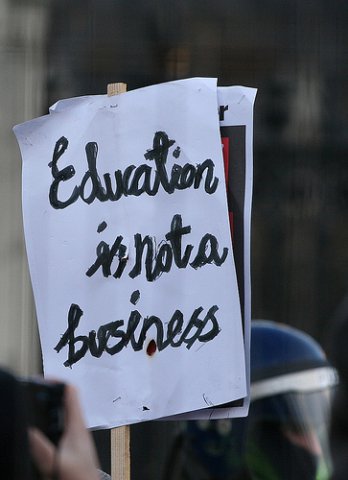 After many months of hints and speculation, the Government announced the first part of the privatisation of the student loan book this week.

The student loan book is the debt owed to the Government by the hundreds of thousands of former students who, especially since fees were introduced, took out a special loan to cover the costs of their education. As this was in effect a government loan, graduates have benefited from lower interest rates than they would have paid to a commercial loans agency, like a high-street bank.

Now all that is set to change. If you took out your student loan between 1990 and 1998, your debt is now the concern of ‘Erudio Student Loans’. As the Independent reports, several dodgy private equity firms lie behind Erudio, obviously hoping that this is their way in to a whole series of public sector debt sell-offs.

Scandalously, due to the difficulty in recovering the debt, it was snapped up by Erudio for just £160 million – despite being worth £900 million. This means a commercial rate of interest on these loans is now likely, in order to make the sale profitable. And the Government is now expected to announce the sale of post-1998 student debt shortly.

Students have led the protest on behalf of current and future graduates. Aaron Kiely, NUS Black Students’ Officer, is right to say: “In June government outlined their intention to sell off the whole of the student loan book to private companies before the next general election. “ Aaron added: “This will lead to higher interest rates and a greater burden of debt on graduates, with private companies aiming to make as much profit as they can.”

The student loan book should remain in government hands. Selling it off to a debt collector is a way of retrospectively hiking tuition fees. That’s unfair and immoral.

The Student Assembly Against Austerity is organising a week of action on campuses in February to protest the plans. To find out more about that, visit their facebook page.

Photo used under Creative Commons licensing, thanks to bobaliciouslondon.

Any legal eagles got any idea of the validity of this?