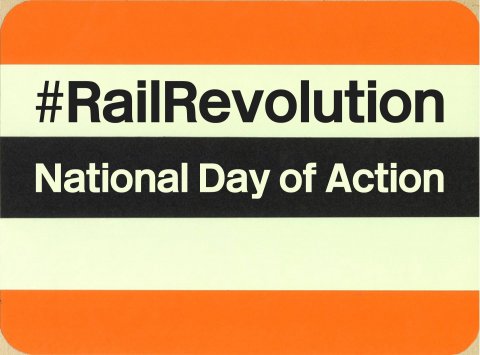 Despite months of delays, cancellations, and chaos this year, rail passengers are being hit with a fare increase of 3.1% in January.

We've had enough. Passengers get no choice and no control over our broken railway - we're at the mercy of private train operating companies who exploit us for profit.

But this January, we're not going to take it lying down. With Bring Back British Rail and the Association of British Commuters, we're joining together to demand better. Join us at your local railway station for the #RailRevolution on the 2nd of January to call for full public ownership of our railway.

Protests are already organised for:

Check the main facebook event page for details and links to local events. If you don't see your station on the list - this is your chance!

Create a facebook event and share it with us, so that we can promote it on the main event page. Invite your friends, and show up on the 2nd of January to make some noise!

If you can't make it to a protest, make sure you've added your name to this petition - which already has well over 100,000 signatures - from Bring Back British Rail. It calls on the UK government to nationalise the railways. We'll be handing in the collected signatures to the Department for Transport later in January as a response to the national rail review which is currently in progress.

People should not have to pay increases when the services have been dreadful. Freeze prices. Remove Grayling and nationalise railways and plan invest plan invest . We do not need HS2 . We do need the money for better services across the north east to west and more trains across the country.

Kat, thanks for talking to me this afternoon after your excellent Sky interview. Please let me know how I can become involved. All regards and best wishes Colin Nixon... time is not on anyone`s side !