Just announced: the biggest privatisation ever

Did you spot it? In Wednesday's budget speech, George Osborne announced: "The sale of government assets this year will deliver the largest privatisation proceeds of all time, higher than the previous record in 1987." This astonishing statement seems to have hardly been noticed. Osborne plans to raise £31 billion this year by selling off publicly owned assets - the most ever raised from privatisation in a single year. 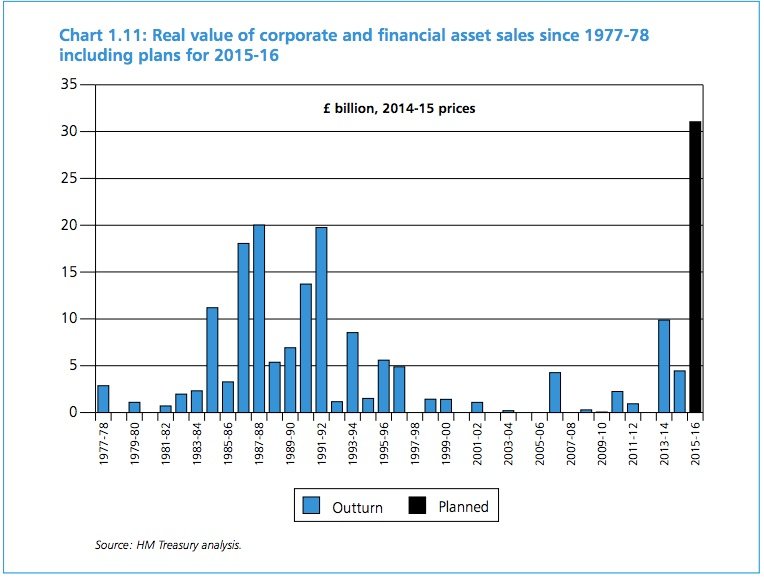 Osborne's statement - and the lack of attention given to it - becomes less astonishing when you consider that mostly, the assets being sold off are banks that were brought into public ownership after the financial crisis. Lloyds, RBS and the mortgage assets from Northern Rock and Bradford & Bingley (managed by UK Asset Resolution) were all in the private sector before the crash, and the government wants to put them back there. 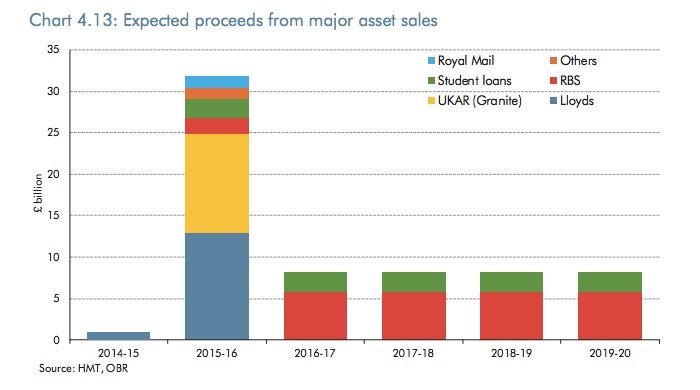 When you look at it this way, the 'biggest privatisation ever' is less of a surprise. But that doesn't mean we should buy into the government's plans.

Firstly, it's not obvious that we should be returning banks and financial assets to the private sector at all. The Office of Budget Responsibility itself says 'Financial asset sales typically bring forward cash that would otherwise have been received in future revenues, in the shape of mortgage repayments and dividends, so they only temporarily reduce the debt-to-GDP ratio. In broad terms, financial asset sales leave the public sector’s net worth unchanged'. Carl Emmerson, deputy director at the Institute of Fiscal Studies has said that selling assets 'does reduce cash debt but you're not really improving the indebtedness of the country'. The New Economics Foundation points out that instead of selling RBS at a loss of around £13 billion, we could use the opportunity to turn it into a new network of local, accountable banks across the country.

Secondly, selling off another big chunk of the student loan book doesn't make sense. There's a risk that we'll end up paying more interest on our loans and it's also a bad deal for the country. In the late 1990s, the Labour government sold two tranches of student loans for £1 billion each. Today, the government is £240 million worse off than if it had kept those loans in public ownership.

Thirdly, just because we've lost most of our Royal Mail doesn't mean we should lose all of it. We need a public stake in Royal Mail to guarantee that we get the postal service we need. Selling off the remaining 15% of shares would mean no public voice in Royal Mail, threatenening our daily deliveries and service standards.

This biggest privatisation ever shows (if there were any doubt) that the government is ideologically committed to the private sector at all costs. Right now, Osborne is mostly focussed on selling off the banks but we're trying to find out what else is planned. We've put in a Freedom of Information request to find out which of our Top Trumps are up for grabs next. Watch this space - and sign the petition to stop the sell off.

I do not understand the mentality of a man who sells things that are making a profit for the tax payer, it makes not economic sense.

Truly a government of the rich for the rich.

Where are the proper Labour MP's these days. We need a modern day Tony Benn please.

We have a potential good Labour leader in Jeremy Corbyn. He understand the financial situation & the best way for the PEOPLE to gain from 'solving' Osborne's mess. The other candidates for Labour leader are still stuck in the "market must be right" blief & capitalism is always right. When will they grow up?

The obvious way to get the economy going Mr Osborne would be to invest , invest in the green industry,renationalise electric, water, gas, buses, trains, banks,the NHS and most importantly invest in young people.I am sure that you would want to be seen as an honest and fair politician who puts the electorate before the city.

You will of course know that economists & the IFS & even the IMF consider INVESTMENT is the best way to get growth.

Osborn must be the worst chancellor of the exchequer ever . He seems to have no idea whatsoever, apart from stealing what belongs to us all, for short term profits for his palsy-walsies. We shall ultimately have nothing. No educational system, no health services or social care, no public transport system, something we are close to achieving regarding the railways which is disgusting considering we invented them and were the pioneers. Already we are the only country in the EU with private failing water companies. Further. more nonsense about the right to buy social housing, means that the stock we have will cease to exist and charitable institutions such as housing trusts will also cease because there will be no incentive to build: why should they bother!

He should be utterly ashamed, should he have enough intelligence to have the ability to self-reflect.

The prospect for UK under this government is terrifying !!