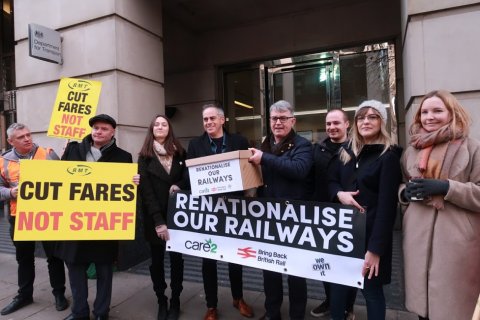 Remember Keith Williams? He’s the man in charge of the government’s major review into our railways.

Keith has had a few months to think about how to fix our broken railway, and despite our polling (which many of you funded), an 110,000 strong petition and all the evidence, he’s still not sure.

So on Wednesday the 14th August, on the day the annual rail fare rise is announced, we’re going to tell him again.

Want to get involved?

Keith’s review promised to be the biggest shake-up of our railway since privatisation, but on Tuesday, all he could do was make vague, confusing statements about ‘delivering for passengers’.

That’s lovely, Keith, but how?

We know that public ownership of our railway is the only way to really deliver for passengers - it’s the only way to stop our fares leaking out into private profits, and create a railway which is actually accountable to the people who use and work on it.

We’ve come up with a model for public ownership that’s accountable, democratic, fair and innovative. It’s not rocket science - you can read all about it here.

Let’s tell Keith how we want our railway to be run - loud and clear on Wednesday 14th of August.

You can join in from your local rail station anywhere in the country - just sign up here to receive materials and instructions!

If you’re in London, we’ll be outside Kings Cross Station on Wednesday morning, and then we’ll head down to Keith’s office in Victoria to deliver our message. Sign up here if you want to join us, or just turn up on the day before you head to work.

If you’re anywhere else - you can take action from any rail station in the country - sign up and let us know where you are:

Keith’s official recommendations will be published in the autumn. That means we’ve only got a couple of months left to push him towards public ownership. The more people take action on Wednesday the 14th, the stronger the public voice will be.

We need to force Keith to choose between the public and the private companies - public ownership, or profits for shareholders. We don’t know what he’ll choose, but we have to make that choice as clear as possible to avoid a disappointing fudge.

Let’s make our voices heard loud and clear on the 14th of August.

The only successful operator on the ECML over the past many years has been the “in-house” model. Private operators fell by the wayside because they couldn’t make enough profit.

We should use the same model for the rest of the railway. WE OWN IT.