Labour's big decision on the NHS - patients vs profits 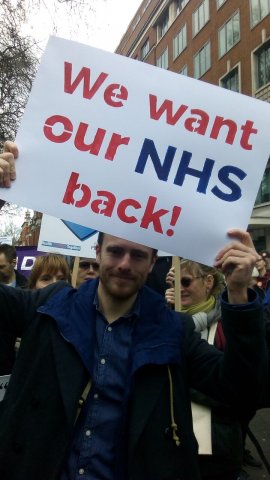 We might assume that with Corbyn and McDonnell at the helm, everything’s fine with Labour’s NHS policy. And fingers crossed, it will be.

But the reality is, there’ve been tough conversations and tricky battles going on internally. And right now – tomorrow afternoon in fact - is a key moment in history. This is the time when Labour can prove it’s on the side of patients, not profits.

Labour, of course, had the original founding vision of the NHS. A brilliant feat and arguably the national institution we’re most proud of, it’s a national treasure that looks after, on average, 1 million people every 36 hours.

But Labour has also embraced the ‘internal market’, the purchaser/provider split which was introduced long before the 2012 Act which embedded private competition in our NHS. And of course, they were chief architects of PFI – which is now clearly recognised as a failure.

So the motion put forward by the Socialist Health Association. being debated at conference tomorrow afternoon about the future of our NHS, and whether it will be public, is a historic moment for Labour. Does the party want to stand up for an NHS fit for the future, well resourced, in truly public ownership? Or will it succumb to the ideological baggage and vested interests pushed by this government?

There's a huge amount at stake for these vested interests – which could be why promoters of NHS privatisation like KPMG and PWC are trying to cosy up to Labour at this party conference.

As Stephen Hawking pointed out recently, our NHS IS being privatised, however many Conservatives try to assure us this isn’t the case. Private companies are getting 40% of contracts, while the Naylor report aims to bribe NHS hospitals to sell off their assets and land.

The government has inflicted such disruptive damage on our NHS that it will take some work to undo. That’s why NHS campaigners have been calling for an NHS Reinstatement Bill. This legislation has been put forward by Green Caroline Lucas and Labour MP Margaret Greenwood and supported by the SNP.

But while Corbyn and McDonnell have both individually committed to the NHS Reinstatement Bill which would sort this mess out, current Labour policy is very much a work in progress.

The Labour manifesto says the NHS would be the preferred – but not the only – provider. And it says that private providers would be stopped from making excess profits – but they could still make profits.

This means as it stands, Labour policy is out of step with the British public, who are sick of Branson and co taking on contracts with the NHS. 84% of us believe in a publicly owned NHS.

That’s why at We Own It, we’re backing up the hard work already done by NHS campaigners with a 5 point pledge for #NHSTakeback. Inspired by and reflecting the demands of the Bill, we’ve pulled together the key principles we need for the future of our NHS to belong to us, not the private providers.

#NHSTakeback is backed by Health Campaigns Together, Keep Our NHS Public, the Campaign for the NHS Reinstatement Bill, Doctors for the NHS, Our NHS, the Socialist Health Association, the NHS Support Federation and Unite. We're hoping it's going to get big, and that means we need Labour on side, reflecting the huge numbers of people who believe in a public NHS.

If Labour was in government tomorrow, it would need a clear plan to take back our NHS. We need to draw some lines in the sand. John McDonnell started to do that today with his promise to scrap PFI contracts - a strong, smart move and absolutely the right thing to do.

We hope he and all Labour MPs will sign up to #NHSTakeback after conference.

Public ownership, meanwhile, is about going forward to a future where services are run efficiently for patients, not profits. Where we all have a real say and a sense of ownership over the public services we rely on and the assets that belong to everyone.

It's about local planning, democracy and accountability. People coming together to find smart, innovative solutions without the motives of shareholders hovering in the background. NHS workers being allowed to get on with the job.

It’s about creating a mixed economy where we don’t insist that the private sector must do everything.

We can build a bright future for our amazing NHS. Ask your MP to sign up for #NHSTakeback and if you're a Labour delegate, vote for the SHA motion tomorrow.

Labour, we’re counting on you.

Sadly my MP is Conservative (& the worst kind - a total puppet), so I'm really, really hoping that the Labour MPs do the right thing and save our NHS

Labour has just announced that they will take PFis back into public control. I'm convinced that Corbyn wants to get the NHS back into our hands, so support him. However, it's going to look bad for Labour, because the way PFIs were set up (thanks, Tories and thanks Blairites for keeping them going) will seem as if they are borrowing more, so we need to be completely behind them, not doubting them! Get behind JC and Labour and let's get the NHS back into our hands!

No good reason at all why the NHS can't be run publicly, there are only bad reasons by those that want to wreck the NHS and profit from private healthcare at the cost in accessibility for the public and eventually ability to pay by the public even by those who through no fault of their own can't afford private health insurance. The whole idea of trying to wreck the NHS (It is being attempted and dangerously big inroads have been made) is obscene, vile and uncivilised.

Let's get back to public ownership in all.

The pledges in #NHSTakeback make better sense than many ideas but establishing a national community healthcare system requires managers to decide who provides what, who gets what, that staff are well trained and that assets that can be funded and sustained.

Patients may want all sorts of treatments and cares and assets in various places but patients are not responsible for running a community healthcare system.

I am glad to see support for ending the purchaser-provider split but why no mention of how cooperation is often better for healthcare than competition? Why no mention that demands must be limited however much money is available? And don’t forget that staff must not be overworked else they will burn out or leave?

Maybe we should also think about how much money various staff and mangers should get.

The NHS is being sold off under our noses and our MP (Tory) doesn't care. Fat cats cream off profits at patients' expense. Time to change and take it back to public ownership

I am convinced the government are using Brexit as a distraction from privatisation of the NHS.

Not quite accurate, even, to claim for Labour the 'original founding vision' of a National Health Service. That was contained in the 1942 Parliamentary Report by Sir William Beveridge ( a Liberal! ) which was about the postwar reconstruction of British capitalism and famously looked to social welfare provision 'from the cradle to the grave'.

Major part of MOD facilities management in hands of a few not the many!Compass, Sodexo,Serco. If NHS is for welfare of all then welfare of military personnel must be treated equally for decent food, good value equipment and accommodation. No point of `in house` NHS but out of house MOD.

Don't worry. Jeremy will sort it out PROVIDING we can give him a big enough majority of like minded MP's

I think a percentage of profits from private companies should go into a central pot before any shareholders are paid.