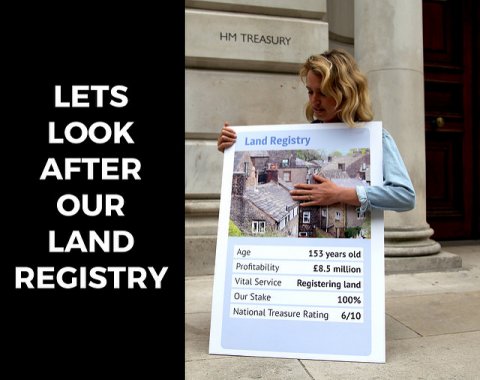 It looks like the campaign to stop the nonsensical idea of privatising the Land Registry has been a success.

If this is true – then it’s great news for all the campaign groups that have been working hard to stop it. As our report, ‘Future profits vs short-term cash’ pointed out, selling the Land Registry was a short-sighted decision that would raise a little money, but leave the public out of pocket in 25 years time. For a vital public service like this that the state is always going to have provide, then privatising it just makes no sense. In the long term we’d be paying for a service that has been doing absolutely fine in public ownership – returning healthy dividends to the exchequer to pay for other public services and doing so whilst providing a service with a 94% satisfaction rate.

On top of this, privatising the Land Registry raised huge questions about transparency and accountability. We need to know who owns land, particularly in light of revelations about tax dodging and off-shore ownership of land and buildings. Putting this information behind a private paywall would make it much harder to address some of these really serious issues.

But whilst we are crossing our fingers about that the privatisation plans been firmly shelved – and hopefully for a lot longer than last time the plan was abandoned, only to see it come back again two years later – we still need to be wary. One government source said: “"no decision has been taken”.

What we do know is that the Neighbourhood Planning Bill – the bill that was supposed to facilitate the sale - did not contain a clause about the Land Registry privatisation. This is good, but does it mean there’s been a complete rethink?

We know that the new Conservative government took its time to rethink Hinckley – only to see it get the green light anyway. So we need to make sure that the Land Registry sell-off doesn’t just get sneaked back onto the agenda when no-ones looking.

Moreover, we need to use this chance to try to force the government to go even further – the Land Registry could be much more open and transparent, making its data easier to access so that we can hold the government to account.

So, thanks to everyone who has supported our campaign against this idiotic sell-off – and all the other groups and organisations who’ve been campaigning to make it happen. If the Land Registry isn’t sold-off then it’s a huge victory for all of us. But, for the moment at least, keep your fingers crossed and eyes peeled!