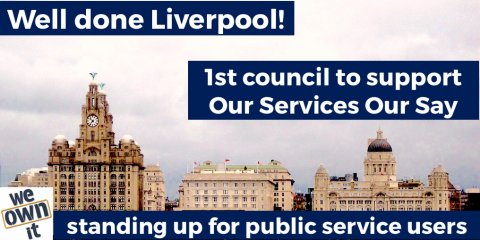 PRESS RELEASE - this story was covered in Local Government News and the Guardian Public Leaders Network.

Liverpool City Council has become the first council in the country to pass a motion to give residents a say over public service outsourcing.

Campaign group We Own It is calling on councils to support principles of transparency, accountability and people before profit, and provide a statement about how they will put these into practice in local procurement.

The Liverpool City council motion, passed at its budget meeting on Wednesday 2nd March, says:
“Council supports the We Own It campaign 'Our Services Our Say'. and urges the Cabinet to provide a statement explaining what the council is doing in practice to work towards the principles of transparency, accountability and placing people and service delivery as key considerations in procurements before profit.”

Local government outsourcing doubled under the coalition government. The campaign aims to stop this trend and give local people a say over their services.

61% of the public think that local and central government should run services in house as the default. Only 21% want to see outsourcing as the default.

The motion (agenda item 23) passed cross-party in the Labour-led council and was introduced by Green Party councillors. Leader of their group, Tom Crone said: “It’s time to take a stand against out of control outsourcing and make sure residents have a say over their services. We’re seeing progress on this issue, in Liverpool so think it makes sense to recognise it with today's motion."

Last year Liverpool ended its 'nightmare' street cleaning contract with Amey six years early. The council has also decided to scrap its Liverpool Direct IT and back office deal with BT.

Cat Hobbs, director of We Own It said: “It’s fantastic that Liverpool is leading the way in signing up to this campaign and being transparent about its public services. We look forward to reading the Cabinet’s statement. I hope councils around the country will follow Liverpool’s lead.”

The Our Services Our Say campaign launched a few weeks ago so this is an early victory. We Own It has had positive responses from councillors across the country and expects other councils to follow Liverpool’s example.

The campaign has support from key unions, academics and NGOs as well as Labour and the Green Party.

A comprehensive review of the research finds that there is no empirical evidence that the private sector is more efficient. Research also suggests that many authorities take services in-house as a way to cut costs and improve quality.

Time to start taking our council houses back and setting up direct works departments to maintain them.

This is a very good start but I haven't seen anywhere here about their setting a no cuts budget. Call me a cynic but is this going to be a case of you can now choose your own cuts? Ensuring no comebacks for service user cuts?

A year after Carillion, it's time to shine a light on public service outsourcing

Taking back control: How councils can stop privatisation in its tracks

Capita has the broadest reach of any government supplier

Capital deserves a place on the most deluded outsourcer podium

The Customer is Always Right: How to Reduce Executive Rewards with Procurement Contracts

Outsourcing the cuts: pay and employment effects of contracting out 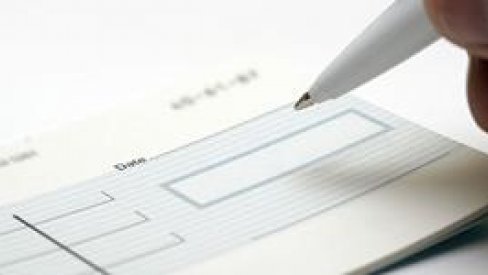 Private contractors - Government must get house in order