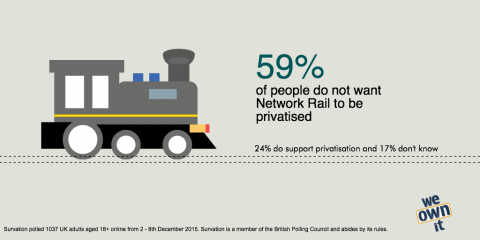 New polling by campaign group We Own It reveals that 59% of the public say that Network Rail should not be privatised, while just 24% say it should.

The polling carried out by Survation shows that even amongst Conservative voters, a majority is in favour of public ownership. 51% believe Network Rail should stay in public ownership while 37% want it to be privatised.

The government is currently consulting on options for bringing in more private sector capital into Network Rail, including the option of ‘full privatisation’. The government’s Shaw consultation started in November and closes a week today, on Thursday 24th December.

Only 13% think privatisation would make Network Rail more safe, and just 1 in 5 think train delays and congestion would improve. 67% think that train fares would increase if Network Rail was privatised.

In the Summer Budget 2015, the government announced that it will “change the way it channels public money through the industry, directing it through the train operating companies, so that Network Rail focuses firmly on the needs of train operators, and, through them, passengers”. (3)

The campaigners point out that we now have one of the safest railways in Europe, according to the Office of Rail Regulation. Privatisation of infrastructure management through Railtrack led to years of underinvestment and contributed to several rail disasters.

Cat Hobbs, Director of We Own It said: “We are Network Rail’s customers, not the train companies, and we don’t want more privatisation. The last thing passengers need is more fragmentation and more money wasted on shareholder profits. Safety has to be the top priority and we know that Railtrack compromised that. Let’s keep our railways safe and move towards public ownership of the whole network.”

We Own It has produced a Christmas video about the Shaw consultation and is encouraging people to respond on its website.

The campaign group is supporting the Bring Back British Rail petition against privatisation, and the Action for Rail campaign for public ownership of the railways.