NHS campaigners fire back at Trump 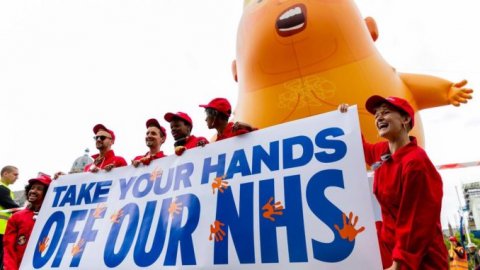 This blog is adapted from a press release from Keep Our NHS Public.

KONP petition against an NHS trade deal with Trump reaches over 200,000 signatures in less than a day

A petition launched by NHS campaigners from Keep Our NHS Public yesterday afternoon has reached over 200,000 signatures in less than a day. The petition which calls “on the government to guarantee that our health service will never form part of a trade deal with America” was started by junior doctor Sonia Adesara of Keep Our NHS Public.

Dr Adesara/Keep Our NHS Public began the petition in response to remarks by US President Donald Trump yesterday that the NHS would be “on the table” in any future trade talks. This morning he has backtracked from this statement in response to public outcry (which includes this petition) saying “I don’t see it being on the table” but campaigners and politicians alike are determined to maintain pressure and will exercise caution on his changing viewpoint.

Including the NHS in a future trade deal with America could mean the health service is opened up en masse to American companies seeking to profit from healthcare. Patient data may be up for sale and access to healthcare rationed. In addition, the UK could also be subject to higher drugs prices from US firms.

Dr Sonia Adesara who started the petition on behalf of Keep Our NHS Public said:

“Our NHS is precious. We will not stand by and watch whilst this government dismantles and sells it off to US corporations. This country loves and cherishes our NHS, we will fight for it. I do not want to work in a healthcare system where patient care comes second to share-holder profits. The popularity of this petition and the public outcry shows how much this country loves and cherishes our NHS and it must be protected.”

“Don’t be fooled by Trump’s bully boy antics to disrupt and then pretend to backtrack: there is no way he’s taking the NHS ‘off the table’. He believes his own lies - like Farage. He will exploit the NHS unless we continue to shout about it. Trump, Farage and Liam Fox all want a fully commercialised NHS. Trump said last year that the NHS as a public system was “not working”, but the strength of feeling here by British people shows they clearly do not agree. We demand our Government guarantees that the NHS is a public service outside of all trade deals.”

A health service is a public necessity, not a luxury solely for those who can afford it.

It's OUR NHS keep your grubby little fingers to yourselves.

I born when there was no NHS or benifits.

I am a surviver of that time having an illness that needed an opperation.

maney children died wait for the money to have operations.

One would havt to be earning over £80,000 a year to afored the full benifits of what we get or got,(as they are being cut every where)

But once gone people on less will have no health care.

please please stand up now for what is ours.

Aneurin Bevan will be turning in his grave. We just CAN'T do this!!!!! We must not do this.