A public railway would take us into the future 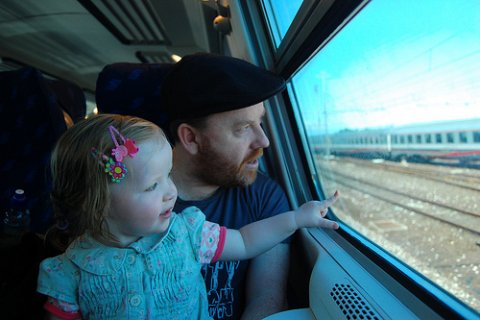 As train passengers get stung with new fare hikes, Malcolm Wallace from Chelmsford TUC summarises the Rebuilding Rail report, which explains how we can create a railway to be proud of. You can take action to help make this happen at Action for Rail.

The UK’s privatised railway is failing society, the economy and the environment, whilst draining taxpayers’ money into the pockets of private shareholders. Common sense and expert railway knowledge have ceded to a misguided private-must-be-best ethos, leaving Britain with a fragmented dysfunctional railway system that other countries view with disbelief.

Excessive costs in the UK rail industry have recently been highlighted by the McNulty Review. This study criticised waste from fragmentation and complexity in our railways, but ignored the obvious solution: simplify the system. Instead, the Review proposes more fragmentation. Analysts have predicted the McNulty approach would lead to older trains, higher fares, fewer services off-peak and at weekends, and more freight going by road. Large sums of money would still be lost to inefficiencies of complex contractual agreements between dozens of companies.

The Rebuilding Rail report outlines a different recipe for reform. It shows that over one billion pounds of taxpayers’ money could be saved every year by reuniting the railways under public ownership. All the public money invested in the railway could then be put to good use, delivering a better service for passengers while also achieving wider environmental and social goals. The Rebuilding Rail project was initiated by Aslef, RMT, TSSA and Unite, to examine how the railways could be restructured to the benefit of both passengers and taxpayers, in order to inform decisions about the future of the railways that will face a future Labour Government.

The context for the project is a widespread concern – shared across the political spectrum – that we are not getting good value from the substantial sums of public money that are invested in the railways every year.

This led the previous Labour Government to commission the McNulty rail value for money study. McNulty’s findings confirmed that the cost of our railways, compared, for example, to other railways in Europe, is higher than it should be. But his recipe for reform is essentially superficial, and unfit to tackle what many observers now see as a fundamental structural problem: that the complex privatised railway structure created by the Conservative Government in 1994 inevitably resulted in fragmentation, creating an inefficient system with legal, administrative and bureaucratic costs at every interface.

There is also the issue that much of the money we put into the railway, through government grants and passenger fares, now leaks straight out. The privatised railway is very profitable for some: the banks that bought the rolling stock companies at knock-down prices; the parent companies that took the profit from the railway as dividends in the good times, but walked away from their franchises when times were less good; the chief executives who enjoy seven-figure remuneration packages. This unfair profit is at public expense.

This analysis of the defects of the current system is not new. But diagnosing the problem is, in a sense, the easy part. The difficult questions are about what new structure would work better; how a Government committed to reform might create such a structure without great expense and upheaval in the process; and whether perceived obstacles to reform – notably EU legislation – are indeed a barrier to creating an integrated railway system. These are the questions that this report seeks to address.

In setting out to answer these questions, the report authors carried out structured interviews with over 20 experts with deep knowledge of the railways, in order to gain their insights as to how we might make Britain’s railways work better. The project has involved a comprehensive review of the academic and professional literature on the effects of privatisation on Britain’s railways. It also looked at how other countries run their railways, and what lessons can be drawn from that experience.

What our railways should be for

In considering how our railways should be reformed, it is important to focus not just on the mechanics of reform, but on what we want that reform to achieve – that is, a vision of what our railways are for. A well-structured fit-for-purpose national railway system would provide the means to achieve a variety of important objectives. Although it seems almost inconceivable given the current state of the railway, we should seek to create a public service that people – both passengers and the workforce – are proud of, rather in the way that people feel proud of the NHS.

In order for passengers and workforce to feel that sense of pride, the railway would need to have a very clear idea – at every level of the organisation – of what its role was, and this would be very differently defined from the role of the railway at present. It should include:

The railway is potentially a powerful tool to achieve these economic, social and environmental benefits. However, attaining these benefits needs overt recognition – largely lost from the UK political debate in recent decades – that the purpose of the railway system is primarily to provide a public service, not private profit.

You can help by contacting your MP at Action for Rail.

Photo used under Creative Commons licensing, thanks to jayneandd.

Has Chelmsford TUC issued a press release to inspire other TUCs to make the demand that East Coast mainline & other franchises etc should be taken over by the public sector?

Even some contributors to shiny, costly Modern Railways are saying this. Friends of Suburban Bristol Railaways (www.fosbr.org.uk)voted to support Rebuilding Rail report at our AGM on 24 January 2013. We need to act on this with a brief statement to MPs, councillors etc. Julie Boston

Chelmsford TUC has written repeatedly to the press on railways which has included Rebuilding Rail. We have supported all the days of action organised by the Better Rail, Action for Rail and Together for Transport. It means getting up early but it is worth it. We leafleted commuters and distributed cards in the High Street and the community. We have told SERTUC about our activities at the county and regional meetings.