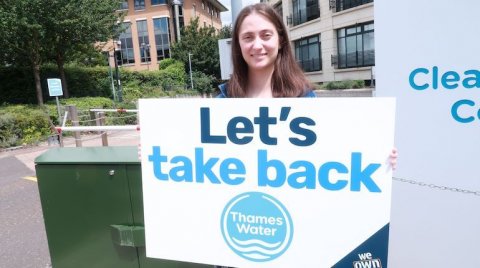 We have written to Rebecca Pow, Minister for the Environment, to call on her to clean up England's rivers, lakes and seas by bringing water into public ownership.

We are writing to urge you to tackle the issue of water pollution effectively by bringing England’s private water companies into public ownership.

As you know, last year, water companies dumped raw sewage into England’s rivers and seas 400,000 times. We cannot rely on regulation to fix the problem. The water industry has been regulated since it was privatised in 1989. Fining companies like Thames Water and Southern Water millions of pounds has not affected their behaviour. Yorkshire Water and United Utilities have even tried to claim in court that they are not public authorities and shouldn’t have to publish data on sewage.

Private water companies prioritise their shareholders. They have the wrong incentives which means they don’t act in the public interest. Water is a natural monopoly which means we have no choice as consumers over the service we receive. That’s why 63% of the public believe water should be in public ownership.

It has been estimated that somewhere between £3.7 billion and £62 billion is needed to deal with the worst of the pollution. The privatised English water companies paid out £57 billion in dividends to shareholders over the three decades since privatisation. This is almost half as much as the money they’ve spent on upgrading and maintaining water and sewerage systems (£123 billion from 1991 to 2018).

We, the consumers, the public, have paid for all of this investment with our bills. The equity invested by the companies' shareholders has hardly increased since privatisation. Instead, these companies have built up a debt mountain of £52 billion. This debt has not been taken on to finance investment, but to finance the payment of dividends.

New research from the University of Greenwich shows that the water and sewerage companies have paid shareholders a total of nearly £17 billion in dividends from 2010 to 2021 – an annual average of £1.4 billion. The English water companies are owned by shareholders across the world, so this money is flowing into the pockets of investors in Australia, Canada, Malaysia and Hong Kong.

Bringing water into public ownership would pay for itself within around seven years. After that, it would save the public purse £2.5 billion a year. This money could be invested in infrastructure to stop sewage pouring into our rivers, lakes and seas, as well as reducing leaks to save water, and cutting bills.

The new public water companies could be given a duty to take care of our environment, to clean up our rivers and seas, and to do everything they can to tackle climate crisis.

In Scotland, water is already in public ownership (while in Wales it’s a not for profit). Scottish Water delivers water and wastewater services for the whole of the country. It is run as a commercial company (it receives no funding from the government) but all profit is invested in better services. Bills are lower than in England and Scottish rivers and lakes are far cleaner.

The evidence from Scotland shows that public ownership can deliver more investment at a lower cost to consumers. Scottish Water invested nearly 35% more per household since 2002 (an average of £282 per household per year versus England’s £210 per year). If the English companies had invested at that rate, £28 billion more could have gone into the infrastructure.

It is unacceptable for raw sewage to flow into our rivers and seas. We call on you to take back control now by bringing England’s water companies into public hands.

its disgusting we are paying for sewage to be treated but instead our money is going to shareholders. the water companies should be held to account for the pollution and threat to life they cause

Our rivers and waterways are sacred and lifegiving they must be kept.Clean

Rachel Reeves confirms Labour has scrapped its commitment to public ownership of water, energy and railways