These nurses are uniting to save the NHS 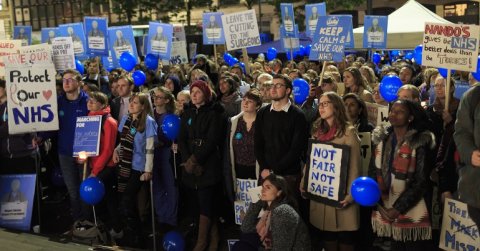 When I first came into Nursing I did it to make a difference. Six years later, those opportunities are increasingly hard to find.

In 2017, I trained to become a Health Visitor in Tower Hamlets. My role was to deliver proper care; to follow a family through their journey from having a baby to getting them into school. Health Visitors are Public Health nurses, we’re supposed to see the whole person, to go that extra mile and touch on the causes of ill health. That was how I was trained.

Since then, no matter where I have worked (two different NHS trusts around the UK) it’s increasingly been the KPIs (Key Performance Indicators) that dictate my patients' care, not their needs. Additional breastfeeding support? “Nope! You need to make sure that you get that 6-8 week check done on time.” Get a woman and her child re-housed by writing to their local councillor? “No, we’re not allowed to do that, there’s a process we follow here.”

This isn’t why I came into Nursing and it’s not what we were taught at university.

Nursing is about being the bridge between the science of medicine and the complexities of humanity. We’re supposed to be human and approachable. We’re supposed to advocate for our patients, which means that as the largest profession in healthcare, we’re supposed to do that by the bedside and out in public eye as well.

Instead of that, nurses are silenced through the bullying and stress that is created by the marketisation of healthcare which robs us of our autonomy to care. It’s not just me who can’t do what I was trained to do because of KPIs and targets. It’s every nurse.

Which is why I and other frontline nurses formed Nurses United.

We’re the people who tried to save the NHS Bursary and were stopped because the Nursing Establishment didn’t think we could win the fight. We took on the fight for pay and were again ignored because our institutions thought they knew better.

Every time a nurse tries to do something, we run up against a brick wall because no one tries to organise nurses anymore. One look at the spaces where nurses talk and all you see is people saying that it can’t be done and we shouldn’t try.

It’s not true. Every time we’ve campaigned, every time we’ve spoken to nurses, they’ve shown their passion for their role and their need to make a difference. It’s the gap in leadership and willingness to take a stand on what actually needs to be done that stops us from winning.

Nurses United believes that every nurse and patient can be a leader of our movement. You need to put the resources into harnessing their passion for their jobs, to show them that standing up for your patients and profession at work is no different from doing so in your community.

More than that, as the most trusted profession in the UK, imagine what it would mean in the healthcare and wider anti-privatisation movement if nurses were activated and had the skills and confidence to campaign? We have immediate problems that Nurses United are tackling to keep nurses and their patients safe during COVID-19.

But in the future? If trying to privatise a service meant that you had to campaign against a bunch of nurses, whose job is to literally condense down complex arguments to people and deliver them in a compassionate way, it’d be game over.

Especially as, Nurses United sees healthcare as bigger than the NHS, but whether or not your society gives you the freedom to be healthy. That means that, the fights I’ve had to endure on the frontline, to get people a stable home or to provide support for people’s mental health, goes out the door. It becomes a part of what the NHS is expected to provide and it’s what we should talk about instead of constantly fighting against a negative.

If this sounds like something that you’re up for, then get involved with us and help us build a movement for nurses and their patients.

As a nurse I want to see us become better advocates for our profession. I am also sick of seeing the NHS used as a political football.

This is marvellous. Nobody knows what is happening in public services like the workers. If we are united and determined to fight we will win. Very best wishes. Larry Sanders, Social Worker, Community Worker and Green Party Speaker on Health and Social Care