These workers are fighting for justice from outsourcing giant Interserve 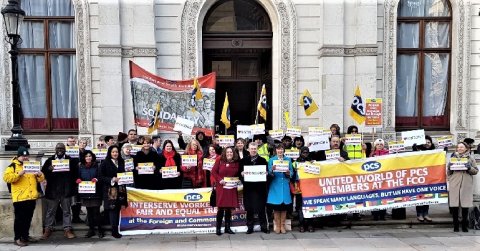 Facilities management workers at the Foreign and Commonwealth Office (FCO) are currently employed by outsourcing giant Interserve. Since March 2019, PCS union members working at the FCO have been in a major dispute with Interserve. The workers’ demands centre around:

Over the course of a year, the dispute has quickly escalated, with 18 days of strike action over six periods taking place in 2019.

In the last strike ballot in October, members voted 100% to back further strike action. PCS wrote to senior executives in Interserve during the ballot period to ask for urgent meetings to seek a settlement to the dispute as well as formally requesting union recognition. They refused.

Now, PCS members are engaged in a month-long strike throughout February, as Interserve continues to refuse to meet workers’ demands.

How did we get here?

In April 2019, workers had their pay date changed. Staff waited over six weeks for payment but were only paid for a month of work. Many staff subsequently got into debt, using overdrafts and credit cards, as well as borrowing from family members. Some of the workers even had to use a foodbank set up by the union to help them through the final days without pay.

Eventually, after a week of strike action from the 10th June 2019, Interserve paid their employees for 80 hours as a ‘goodwill’ gesture. Whilst welcome, this payment covered the two weeks staff had waited for pay, but it did not cover the financial hardship they were still paying for. It is because of this that PCS members wish to buy-out the change of pay date; a contractual change which took place without the agreement of staff.

As part of the pay date change, pay is now calculated as a daily level, meaning the levels of pay vary each month and in some years would actual mean a significant reduction in salary. This change also makes it hard for staff to budget and manage their finances.

Following strike action in May some of the cleaning staff had their long-term overtime cut or removed all together. Interserve claimed that they had reviewed practices and introduced industry standards. In reality, cleaners are being asked to clean the same amount of area in less time.

Interserve workers see the civil servants that they work alongside with as colleagues, yet their terms and conditions vary greatly. Interserve employees do not get any company sick pay, they are only entitled to claim statutory sick pay after three days of absence. This means they often come in when they are sick, for fear of pay loss and disciplinary action, meaning that they could be preparing food or working in close range of others with contagious illnesses. This is unfair and PCS members deserve basic sick pay from day one. The money Interserve has wasted on bringing contractors to cover strikes could easily cover the sick pay of staff in any given year.

Interserve workers want their employer to recognise their trade union as this will enable their local union representatives to engage in consultation over issues which affect them at work. Their reps can also attend training to give them better support. Ultimately, they want the right to collective representation at work to prevent the poor way they are being treated by their employer to continue. PCS was recognised by Interserve at the FCO as recently as early 2017.

Interserve have stated their desire to ballot ‘all staff’ through ACAS on whether they should recognise PCS in order to be ‘democratic’. This is despite Interserve recognising PCS in other government areas, and despite their earlier statements suggesting that recognising the union was not ‘desirable’ to them.

Where do we go next?

Interserve are continuing to spread misinformation about the dispute and about what can be done to bring this to a close. It would be very easy for them to do the following:

The FCO and the current Foreign Secretary have, so far, failed to help bring this dispute to a close. The former Foreign Secretary Jeremy Hunt wrote to the Interserve CEO in June 2019 following a week of strike action and PCS is now calling on Dominic Raab and the Permanent Secretary, Sir Simon McDonald, to intervene and assist in the finalisation of this dispute.

PCS members deserve respect in the workplace as well as fair and decent pay and terms and condition. Recognition of PCS as their union will ensure they and others will be properly represented during difficulties with their employer and we believe it is a fundamental right of any worker to have access to a recognised trade union in any modern workplace.

How you can help