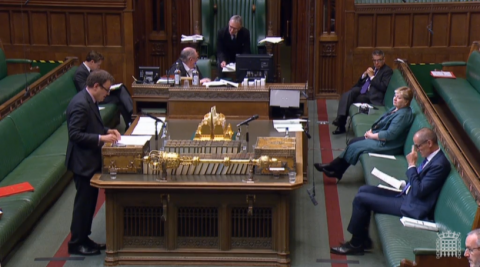 Yesterday, Conservative MPs failed their constituents and voted against the amendments to the Trade Bill that we need to protect our NHS from future trade deals.

During the Trade Bill’s Report Stage, the final step before the Bill is submitted to the House of Lords, MPs had the opportunity to back two key amendments that would have helped keep our NHS safe. Leading up to the vote, you sent over 18000 emails to MPs across the UK asking them to do the right thing.

Hundreds of people took the brave step of training up and holding a meeting with their elected representative. Countless letters were published in local newspapers across the country. This should have been democracy in action. But the Conservatives are throwing democracy out the window: ignoring their constituents and voting against parliamentary scrutiny of trade deals.

After six months of promising that the NHS is in safe hands, Tory MPs have clearly demonstrated that they are not prepared to follow hollow words up with the action required to take our NHS ‘off the table’.

What were the amendments and how did MPs vote?

Caroline Lucas and Labour’s amendment was voted down: 340 to 251 votes. This clause would have protected the NHS and publicly funded health and care services in other parts of the UK from any form of control from outside the UK. How did your MP vote? Search here.

Jonathan Djanogly’s amendment was also defeated by his fellow Conservative MPs, with 263 votes in favour to 326 against. If it had passed, this would have given MPs and peers a say on any new agreement signed by the government. How did your MP vote? Find out here.

This leaves our NHS exposed, and MPs without a final say on future deals. The government promised to ‘take back control’ and keep the NHS off the table, but they have done the opposite.

People across the country have been expressing their feelings of frustration and anger at this blatant disregard for democracy.

Add your voice and make the noise our NHS needs:

Sign the petition for the Lords to protect our NHS
The Trade Bill will now go through the House of Lords, so it’s time to call on the Lords to support the parliamentary scrutiny of future trade deals we need to keep Trump’s hands off our NHS.

Write to your local paper
Send a letter to your local newspaper to spread the word about how your MP voted on Monday. Show your MP that they are accountable to the people in their constituency, and that this vote will be remembered.

Tweet your MP
If your MP voted against either amendment, directly @ them and ask ‘Why did you betray your constituents and vote against protecting our NHS from future trade deals?’.

Hi, I am signed up to your newsletter, and like you have been following the trade talks and implications for the NHS. I have health problems and rely on the NHS, I feel panicked if I think about what is happening too much. But this is the problem. How many people are not thinking about it - or worse not even aware of the issue? I think we need urgent action, mass public education and then protests before the house of Lords debate - to show this issue which is getting lost. There would be outcry surely if it was known its a liklihood we are going to lose free health care.

I am aware you have been campaigning on this and would like to join the work you are doing. It seems we have a short window here.

I'd be grateful if someone could get in touch.

Thank you so much for your message, and being part of our movement to defend OUR NHS!

We would love it if you were able to join our weekly webinar, where we update on our campaign and hear from supporters. You can sign up here: https://weownit.org.uk/act-now/events

Alternatively, send us an email to info@weownit.org.uk and we will get back to you.