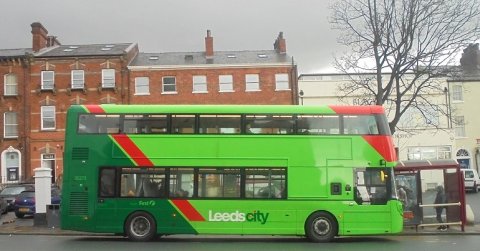 In May, voters will go to the polls to elect a new mayor for West Yorkshire. Across the region, transport is a major issue. From unreliable buses, to overpriced trains, our current transport system isn't working.

Public control of our bus network must therefore be a central part of West Yorkshire’s transport strategy. That's why it should be at the heart of Tracy Brabin's campaign to be the region's next mayor.

Brabin's commitment to “transport for people, not profit” is welcome. Our public transport network needs to put the needs of West Yorkshire’s residents first. To achieve the rapid increase in public transport use we need to deal with the climate crisis, we should focus on expanding the region's bus network - which already accounts for two-thirds of all journeys on public transport.

When seeking the backing of Labour Party members, Brabin also stated that “buses should be publicly controlled to put people before profit.”

These are vital commitments. They need to be kept to. We've seen time and time again that the privatised bus 'market' isn't working for residents of West Yorkshire.

Privatisation is failing in countless ways:

There is an alternative to this chaos, cuts and profiteering. We could bring our buses into public control. This would allow us to:

Bringing buses into public control is the answer. There is no alternative.

The supposed alternatives proposed by private bus companies - voluntary or statutory partnerships - leave nearly all the power in the hands of those very same bus companies. Changes will only be made to the extent that they deem it in their interests. We need a system that puts the interests of West Yorkshire’s people first.

After repeated lockdowns have left our local businesses reeling, we need an outline of a clear timetable for investigating and implementing bus franchising in Tracy Brabin's manifesto. This will signal to our region’s shops, restaurants and gyms that Brabin will reinvigorate our highstreets by boosting footfall with cheaper and more frequent bus services. It will also give bus drivers and passengers the certainty we need to lend our support to her transport policies.

Brabin has said she wants to be the 'Andy Burnham of West Yorkshire’. She should now follow in his footsteps by pioneering the use of the powers given to Mayors by the Bus Services Act 2017 to explore and implement franchising as a priority.

Not only would public control of our buses be popular (69% of people think local councils should be the main decision-makers on bus services) but we simply do not have time to waste on partnership deals that could fall through at any moment, where bus companies still only run those services that turn them a profit.

We need the security of a better, publicly controlled bus network that will use public money effectively. We need buses that are clean, green, affordable and accessible. Bus companies have not, and cannot, deliver this. But the next mayor of West Yorkshire can.

Get on with it,' says RMT as it uncovers 'oven-ready' blueprint for public rail