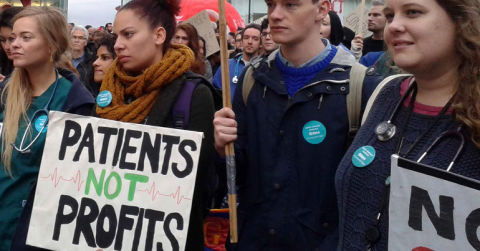 The two most impressive characteristics of the NHS must be its size (the projected annual budget this year for England alone, before the pandemic, was over £130 BILLION – and it went up) and its complexity. Both of these are down to the overriding purpose of our NHS: to provide the best possible healthcare to all who need it, free at the point of delivery. Publicly funded, publicly accountable. Its complexity of structure is matched by its simplicity of concept. It is one of the best ideas the UK has ever had, and it is wonderful.

In practice, this idea was dealt a severe blow by the Health and Social Care Act (HSCA, 2012), which made it a legal requirement for the NHS to put contracts for services ‘out to tender’, and removed any responsibility from the Secretary of State for Health for quality of service delivered. This was a recipe for privatisation – the large-scale taking over of chunks of the NHS (only those that can make a profit, of course) by large private companies. The only sure way of achieving a robust defence against privatisation in the long term is, of course, to repeal the HSCA and replace it with Allyson Pollock’s NHS Restoration Bill or something like it. Otherwise, we will continue to career towards the cliff edge, whatever else is done.

The irony is that sometimes, the NHS has to use privately run healthcare to overcome particular problems. It always has. Ever since Nye Bevan realised private medicine was going to be a political reality in the UK, it has at times been used by the NHS for the public good. ‘Waiting list initiatives’ are a common example: elective procedures (like hip or knee operations) carried out on private hospital grounds for the NHS, as a way of getting waiting lists down. Local trusts decide how much public money the private hospital gets, and how many people it treats; this is under NHS control. And that’s the critical difference: who has control of this?  A local NHS trust, deciding how to handle its waiting lists?  Or a mega-corporation, taking over swathes of NHS activity centrally and with only its shareholders to answer to?  Who owns what?

Of course, the local ‘farming out’ of waiting lists by the NHS comes at a price – one of many costs NHS managers have to juggle. A far less palatable and manifestly more unfair way of dealing with the same pressure on elective procedures is for some CCGs (the bodies responsible for funding what NHS trusts do in an area) to start excluding some categories of patients from elective treatment altogether, on grounds that should be considered clinically, as part of a wider clinical picture, but which are instead reduced to convenient ‘tick lists’ to save money. The result is that people who are obese or who smoke are refused hip operations within that CCG area, in a growing trend which reflects the NHS’s chronic underfunding over time, and introduces avoidable suffering and more unfairness as a result. Even more unfair is the growing need for individuals to turn to ‘private health’ to avoid ever-lengthening waiting times for their first consultation or scan, as NHS funding falls further and further behind need. As long as they can afford to, of course – if you don’t have the money, you just have to wait, suffer and worry, as our NHS is left struggling.

More recently still, private hospitals have been contracted to serve alongside NHS hospitals in dealing with the pandemic and its likely longer-term consequences. Essentially, far more space will be needed to continue to treat Covid-19 patients, and resume the myriad other treatments that have been put on hold, than the NHS has to use. Private-hospital capacity is relatively tiny, in comparison with that of the NHS, and the private sector in the UK does not and cannot offer the same range of services our NHS is capable of. But in a post-pandemic world – where social distancing, PPE and continual deep cleaning and quarantine are the new norm for hospitals and staff – the private capacity must be regarded as a resource to which the NHS needs to turn.

The NHS needs to draw on all the resources it can acquire, including the promised extra funding from government, to ensure people needing treatment – some of whom are very ill – are not kept waiting any longer. My organisation, Doctors for the NHS, welcomed the temporary use of private facilities to allow this – with a heavy note of caution: the NHS must keep control. The private hospitals are there to do the NHS’s bidding at its behest – never the other way around. So it must be up to NHS managers to decide which patients go to a private facility and for how long that continues. The NHS must retain the power to pull the plug when public need requires it. NHS hospitals beds must not be kept empty for weeks or longer ‘so that the private facilities can still be used’ – that is privatisation under another name. All of this must be publicly accountable.

We also caution against the view that the private sector is some kind of gleaming, supercharged saviour to rally our ‘struggling’ NHS in its hour of need: it is not. Apart from anything else, it is by and large the same doctors working in both settings. Conjuring up the private sector does not create legions of pristine doctors who were not there before. Same work, same pairs of hands, different buildings. That’s the first point. The second – safeguarding. We need assurance that patient safeguarding and other standards are applied and monitored equally across all settings used by NHS patients, and are not relaxed, as the Care Quality Commission has suggested might happen. No, no, no. Risking another Mid-Staffs, only this time behind the anonymising cloak of private organisations, who do not have to be as accountable as the NHS, even now? How can that be fair, or just, or safe, to anyone?

The third point: this is a temporary fix, not an ongoing solution. NHS waiting lists stood at a record high of 4.6 million before the pandemic struck, and had been rising steadily due to misguided policies of reducing hospital beds and capacity in operating theatres and critical care. Falling numbers of GPs and a lack of investment in primary and community care meant that hospitals were having to fill those gaps as well. Our funding levels remain below the average for comparable countries, despite recent government pledges: 9.8% of GDP in 2018 compared with an average of 10.1% (Germany’s figure is 11.2%). Tiny differences, you might think – but even small differences on this scale translate into massive consequences, especially after years of underfunding have left 67% of trusts across England in the red as of last year, by a total of £960 million. The NHS is starting from a deliberately weakened position. We must not let anyone get away with blaming Coronavirus for the whole of this predicament. Once the rain stops, we need to fix the roof. NHS funding needs to increase, and if that means a little more income tax spread proportionally, so be it. It means more lives saved, less suffering, less worry, and less incentive to ‘go private’ (if you can). We think most people would not object to that.

The NHS was catapulted into the public eye as the heart and soul of the UK when the pandemic hit. Massive sacrifices were made, and many lives were lost. But many more were saved, by the NHS. We all stood and clapped for that, rightly. But this is not guaranteed to last. Already, the NHS is at risk of being ‘blamed’ for failures of the test and trace system (thanks chiefly to the use of its logo) when large private corporations, such as Serco, are the real culprits. The joyful applause could quickly become a slow handclap, with the NHS getting all the blame and private companies all the profit. That is not the NHS using private facilities for short-term need – it is private health companies establishing a permanent presence while shifting the blame. That is control being taken off the NHS. That must not happen. The public have given much to protect the NHS over the past few months. It still needs our help – but not because of Covid-19. Help protect the NHS.

Alan Taman is Communications Manager for Doctors for the NHS. He is also completing his PhD, on public perceptions of health inequalities and policy engagement. He lives and works in Birmingham.

This leaves out the fact that more capacity is needed now precisely because capacity has been dramatically reduced.

It also leaves out the fact that the reason public capacity has been reduced is to allow the private sector to grow in its place.

There's an effort to normalise this, and to invoke Bevan in doing so. All in all this is very below par.

Excellent informative article. Too much of this is hidden away. Absolutely agree we must deal with this regressive privatisation of our NHS - as part of having a fairer, kinder and more healthy world. Thanks for all your work