We need to Crush Covid with local, publicly run test and trace 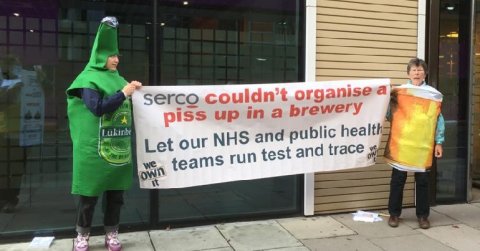 Everyone knows that so-called ‘NHS Test and Trace’ has failed badly, despite its enormous budget of £22 billion. This eye-watering sum of money is coming from taxpayers’ pockets, both now and in the future, but its main effect appears to be to enrich private companies. It could be put to much better use if it was given to public health professionals and the NHS proper.

Crush Covid, a new campaign based in Oxfordshire, part of Oxfordshire Keep Our NHS public, has worked through Oxford City Council and the Oxfordshire district councils to persuade Oxfordshire County Council to take testing and tracing back into public hands and run it locally, under the Director of Public Health. We also want to inform local people that there is an alternative to the government’s approach, and tell them how such a system would work. If local councils and residents back such a system, realising that it could enable them to resume their daily lives sooner rather than later, the momentum produced could persuade the government to change course and give the funding to local public health teams.

On 30th November 2020, Oxford City Council unanimously passed a motion calling for testing and tracing to be taken over by the county council’s Director of Public Health – from the outset and not as currently, only after the national scheme has failed.  Lambeth council has now passed a similar motion, and there is talk of a London wide initiative. We hope many more will follow.

We have made our materials available on our webpage, in the hope that other campaign groups can use them to talk to councillors and persuade them to put forward similar motions in their local areas. Together, we can build a head of steam. Many local government officers and directors of public health are already pushing the government to allocate the funding available to them. Independent SAGE, a group of eminent academics, doctors and experts in the field of public health, have published a blueprint to achieve and excellent Find, Test, Trace, Isolate and Support system, which can be used both nationally and locally to put such a system in place.

Crush Covid now hopes to spread the word among the people of Oxfordshire, emphasising that this is a cross-party campaign and that its aim is to save lives and revive the economy. We very much hope that other campaigns will take similar action, because so many people don’t seem to realise that there is an alternative to the Government’s approach. A locally run system – run by our public servants, not by overpaid, unaccountable consultants and profiteering private companies – would look after people, keep us safe and help put an end to this misery. The vaccination programme needs to be complemented by such a system. We very much hope others across the UK will join us.

Find out more about the Crush Covid campaign here.

A locally run system – run by our public servants, not by overpaid, unaccountable consultants and profiteering private companies – would look after people, keep us safe and help put an end to this misery.

I am so angry about the amount of our money given to private, often ineffective,

DO NOT TRUST THE tories WITH OUR NHS. tories, for the most part, are greedy, selfish LIARS. They are like pigs at the trough; they and their mates are feeding with gusto off of brexit and now Covid. How do they get away with it? I ought to be a conservative and have a lot to conserve but I could and would never vote tory; they are liars and bullies.

Do not trust the tories with the NHS. They cannot be trusted because they are ideologically, probably genetically, disposed to privatise all public services and, in particular, OUR NHS.

And the British Public now must insist in there being an in depth inquiry into what happened with Covid, and specifically the awarding of contracts for services, particularly the Test, Track and Trace project and also the supply of PPE of course.