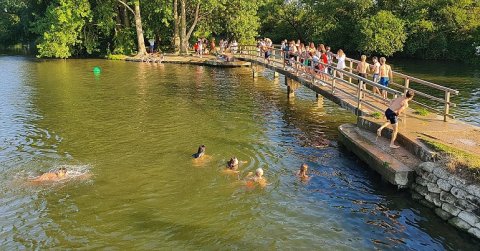 On a hot sunny day, there’s nothing better than going for a picnic and jumping into a beautiful river to cool off. But who wants to swim in a polluted river? Last year alone, privatised water companies dumped raw sewage into our rivers on more than 200,000 occasions - that’s disgraceful!

If you live in England, your water is privatised. Since our public regional water companies were sold off in 1989, our water bills have increased by 40% in real terms. Meanwhile, private water companies continue to hand over billions to shareholders while failing to invest in crucial infrastructure to keep our rivers safe. This is unacceptable. From kayakers to kingfishers, water lilies to wild swimmers, our rivers are crucial for the health of our communities and ecosystem. That’s why we need to keep them healthy too.

One of the rivers suffering most from privatised pollution is the Thames, which flows through the beautiful city of Oxford. Thames Water leaked raw sewage into the upper Thames for a total of 17,000 hours in 2019! And local residents have had enough. Last month, more than 70 campaigners took to the river to tell Thames Water that they wanted ‘water voles not toilet rolls’.

Now, local campaigners have launched a petition calling on Thames Water to clean up their act and make our rivers safe again. The #EndSewagePollution Mid-Thames group’s petition aims for the stretch of the Thames that flows through Oxford to be given Designated Bathing Water Status.

So what would this mean exactly? With Designated Bathing Water Status, the Environment Agency would need to carry out weekly water quality testing in the area in the Summer months and categorise the water quality from ’excellent’ to ‘poor’. This would increase the pressure on Thames Water to invest in our rivers and upgrade its sewage system. The information collected about water quality would also need to be made public to help local river users avoid pollution and stay safe.

But Oxford isn’t the only place where communities are fighting back against failing private water companies. Windrush Against Sewage Pollution have also been exposing Thames Water’s terrible track record of polluting the River Windrush. Ilkley Clean River Campaign is leading a movement to turn a stretch of the River Wharfe into a designated bathing water spot and pressure Yorkshire Water to clean up its act. Surfers Against Sewage have also been working for 30 years to end sewage pollution in our rivers and the ocean caused by private water companies that are failing to invest in crucial infrastructure.

With many gyms and pools shut over recent months, there has been a huge increase in the number of us relying on our rivers for exercise. Now more than ever we need our rivers to be safe and healthy. Private water companies have proven time and time again that they’re not up to the job. We need public ownership of water in England to make sure our water is run for people, not profit. It’s time we brought an end to privatised polluting and gave our rivers the respect they deserve.

The deadline to sign the petition for Designated Bathing Water Status for the Thames in Oxford is 28th September - add your name here.

I think if the private water companies fail on their stewardship of the rivers and watercourses they should lose their contracts and be made to hand it back to us. Their shareholders should not recieve dividends when the rivers are in poor condition.

Water is a fundamental and belongs to the people. We should not be paying private companies for an inadequate service which neglects our infrastructure in favour of their profits

Think this is so important.