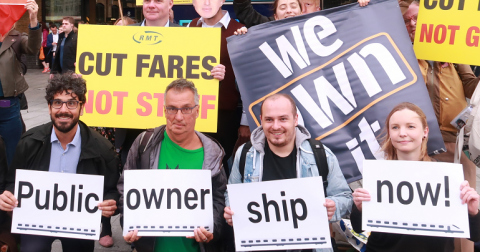 These are dark times.

Maybe you’re terrified about what happens to our NHS with a Trump trade deal. Maybe you’re a frustrated rail or bus passenger.

Maybe you want schools to be properly funded and democratically accountable. Maybe you’re losing out because of crumbling council services and lost libraries.

Maybe you’re worried about whether public services are there for all of us, especially the most vulnerable like disabled people and migrants. Maybe you’re scared about the future of your grandchildren in the climate crisis.

Whether you’re all of these or just some of them, you're not alone.

Many of us in this country believe in PUBLIC services and people before profit. We believe there is such a thing as society. We believe we are it.

Last week’s election result didn’t give us what we wanted. Our new government wants to continue with the failed ideology of privatisation and worse, it’s putting our public services, most frighteningly our NHS, on the table in a Trump trade deal.

But there are some rays of hope.

Thanks to you, public ownership is on the agenda

We know that many many people, whoever they voted for, believe the UK should not be for sale, should not become a deregulated tax haven or free for all for business. People on both sides of the leave/remain divide believe in public services for people not profit. This agenda is popular and has the potential to unite people.

In 2020, let's remind Boris Johnson every step of the way that the people want public ownership.

Thanks to you, the NHS is a top priority

The Tories have received the message loud and clear that the NHS is a top priority, from us in partnership with Keep Our NHS Public, Global Justice Now, OurNHS and many other fantastic organisations. The campaign that you’ve made happen – writing to your election candidates, signing the petition, funding new polling, creating art, taking to the streets - has been a hugely important part of that. They haven't been able to ignore us.

Although it didn’t stop him being elected, Boris Johnson knows he’s not trusted on the NHS. That’s why he’s still saying it won’t be on the table (even though it's already being privatised), that’s why he’s promising cash and that’s why he’s making his cabinet repeat his lies on NHS funding.

In 2020, let's do everything we can to stop Boris Johnson from selling off our NHS and other public services.

Next year, we fight

This year you won the fight to end the privatisation of the probation service, bringing it back in house after Chris Grayling’s disastrous reforms. Together with allies - NAPO, GMB, UNISON, New Economics Foundation, Transnational Institute and Compass - we all pushed back and won.

You’re one of the crucial people who make all this campaigning possible. We need you with us now more than ever.

If you care about public services, our NHS and our future, we really need you with us in 2020. Please set up a regular donation so we can fight for the NHS and for all our public services.

We can’t do this without you. We Own It is a shoestring organisation with a team of five people that punches above its weight.

This is about what kind of country we want to be. A deregulated, American-style tax haven or a decent, forward looking place where we look out for each other.

We won’t let Boris Johnson sell off ever more of our precious public services. We want to take our stolen stuff back. And if our NHS is on the table, we’ll fight them every step of the way. We are the people.