Our campaign to get the House of Lords to pass the NHS protection amendment to the Trade Bill has entered a critical stage. Last week, Lords and Baronesses debated the amendment at the Committee Stage, and it will move to the Report Stage in two weeks, where it will be voted on.

If we are going to win in the Lords, the next two weeks are absolutely critical.

In order to continue to make our voices heard in advance of that vote, we are writing to the leaders of the four main groupings in the Lords asking them to whip their benches to vote for the NHS amendment and we want you to become a signatory to our letter. The more people that sign on to the letter, the more impactful it will be.

You can read the letter in full below. 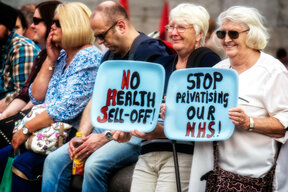 Baroness Smith of Basildon (Shadow Leader of the House of Lords)

We would like to start by thanking you for your time and for all the great work you are doing.

We are writing to you to urge you to support a cross-party amendment (Amendment 51) to the Trade Bill tabled by Baroness Thornton (Labour), Lord Patel (Crossbencher), Lord Fox (LibDem) and Baroness Bennett of Manor Castle (Green) to protect our National Health Service from foreign control under the terms of any future trade deal. We are also asking you to whip your benches in support of that amendment.

On the 8th of September, the Minister of State for the Department for International Trade, Lord Grimstone of Boscobel, acknowledged "the importance of the NHS to the people of this country". He assured the House, therefore, that “the NHS is not, and never will be, for sale to the private sector, whether overseas or domestic”.

But there are many ways that our NHS is vulnerable to trade deals, short of a wholesale selloff, which the amendment set out by the cross-party group of Lords aims to prevent.

For example, the US pharmaceutical industry has already made known its desire to force the NHS to pay more for US drugs,1 and a Trade Bill that does not explicitly exclude our NHS from trade deals would provide the perfect platform for the US government to push for drug reimbursement regimes that allow them to charge our NHS more. This is why the clause in the amendment which excludes the regulation and control of “the pricing and reimbursement systems for the purchase of medicines or medical devices” from trade deals is so important.

Likewise, the amendment aims to “prohibit the sale of patient data, public health data and publicly provided social care data.” Given the public outrage created by The Observer’s2 report in December 2019, which revealed that data from millions of patients in our NHS is already being sold to US pharmaceutical companies, it would be scandalous to the British public if the amendment does not pass.

Lastly, regardless of where one stands on the issue of leaving the European Union, the outcome of that vote, the subsequent European parliament election and the last General Election, make it abundantly clear that the British public want to see sovereignty over our institutions explicitly returned to the United Kingdom. What this requires, in terms of the Trade Bill, is that the NHS is excluded explicitly from the purview of any Investor-State Dispute Settlement (ISDS) clause in any future trade deal. The Investor-State Dispute Settlement system allows multinational companies to sue governments for the introduction of public policies and/or regulations which those companies believe undercut their future profits. A UK government, regardless of party, should be able to enact “policies, legislation and regulation which protect and promote health, public health, social care and public safety in health or care services” in the United Kingdom without fear of being sued.3

According to polling conducted by Survation4 in July this year, 75% of the British public want parliament to amend the Trade Bill to explicitly exclude our NHS from any future trade deals. And almost half of those polled said they didn’t want to take the Prime Minister at his word that “the NHS is off the table” in future trade deals. Supporting this amendment would put you in line with the British public.

Trade Justice Movement has also written a very useful brief, which you can refer to.5

We urge you to support the NHS protection amendment (Amendment 51) and to whip your benches to vote for it. We would welcome an opportunity to talk with you about this issue should you so desire.

The We Own It Team and the undersigned