Internet monopolies should be owned by us all

The internet has been a virtual wild west, fast-moving and little regulated, with tech companies competing for territory. But now there are clear natural monopolies developing.
Author Jonathan Taplin points out that Google has an 88% market share in search advertising, Facebook (and subsidiaries Instagram, WhatsApp and Messenger) owns 77% of mobile social traffic and Amazon has a 75% share in the e-book market. Taplin argues that they are using their monopoly power as platforms to crush publishers online and stifle innovation, while keeping their profit margins super high.
We argue that monopolies like water, energy and the railways need to be brought into public ownership - regulation alone isn't enough. So why not Facebook and Google?
The internet is a public space, where people share information, explore new ideas, promote products and coordinate political activity. But the rules are set and enforced by unaccountable corporations - not by us.

We need to own our data

Google and Facebook are valuable because they have access to data from over 2 billion people across the planet. They can sell this data to advertisers.
We don't have much of a choice about whether to use Google or Facebook - this creates problems for privacy, and our data is harvested to sell us consumer products.
For example, the political advertising and data company Cambridge Analytica was embroiled in a major scandal with Facebook in 2018. Revelations showed that the company had harvested personal date of millions of people without their consent for the purpose of political advertising. This data was allegedly used to promote Donald Trump's Presidential campaign and the Vote Leave campaign in the Brexit referendum.
But why should our data be in the hands of private companies?
Professor Philip Howard argues that 'Facebook is now public infrastructure and should be treated as such'. He believes the platform could help us solve social problems using big data. Google has unprecedented amounts of data that could be used to solve worldwide problems. Public health, national security and democracy could all potentially benefit.

Start ups and civil society are being crowded out

Social media - and the internet in general - creates an exciting marketplace of ideas that could help us all. But on Facebook, the barriers to entry are getting higher and higher.
When We Own It started up in 2013, there was much more 'organic reach' on Facebook (a good response to a post meant it would reach a bigger audience). Now, it's increasingly a place where organisations must pay to connect with their supporters and reach new ones. That trend is set to continue.
The deck is stacked in favour of multinationals with big advertising budgets, while smaller start ups (which may have good ideas) struggle to get a foothold. Campaigning groups, charities and small businesses are being crowded out in favour of corporate brands.
Google has used its power over the internet to stop other search engines from getting a foothold.

We're addicted - for the benefit of advertisers

If you've ever felt addicted to the internet, you're not alone. We're all endlessly scrolling, messaging, gazing at our screens.
We are the product here. Tech companies make money by advertising to us. So the more time we spend online, the better. These companies are using their smartest designers in Silicon Valley to take as much of our time as they can. Facebook in particular encourages addiction through design - attention-grabbing notifications and social pressure - to keep us hooked. Netflix and YouTube autoplay the next video so we don't have any 'stopping cues'.
It doesn't have to be this way. The Center for Humane Technology is a new movement which calls for redesigning technology to make us less distracted online. But the internet's real clients are advertisers - not us - so there is no incentive to reduce our addiction.

What would it mean for the public to collectively own some of the public spaces on the internet? We could set the rules and reinvest profits. We could even help create more accountability for global decision making – giving people a democratic forum online. (We could rename Facebook 'Placebook'!)
Public ownership of internet monopolies needn't - and shouldn't - mean state control. The solutions we need here are surely international, not national. And these companies have powerful data about private individuals - we should be wary about how governments could use this, especially in dangerous political situations. Could we create some kind of new cooperative, democratic, accountable institution rather than relying on nation states?

But Zuckerberg will never let this happen?!

That's probably true. But we need to start talking about how we might make this happen in the future.
The first option is to create an alternative platform. This is extremely challenging. Google and Facebook both have access to huge amounts of data and strong 'network effects' (everyone uses them and that's what makes them valuable). A switch would need to be a coordinated, well promoted global effort to have a chance of success.
Another way forward would be buying out the existing social networks. This would be a huge challenge, financially and politically. There is a glimmer of hope however – check out this project for Twitter users to buy out Twitter, creating a community owned resource.
A third and final way could be to appeal to Google and Facebook directly! It would be a noble legacy for them to acknowledge that what they've created is now owned by all of us. Is there any chance they could be brave and selfless enough to do it?

5 reasons why Facebook should be in (global, cooperative) public ownership

Instagram threatens to stifle a new generation of poets

Barcelona is leading the fightback against smart city surveillance

The UK's left is scrambling to adapt to Facebook's algorithm change 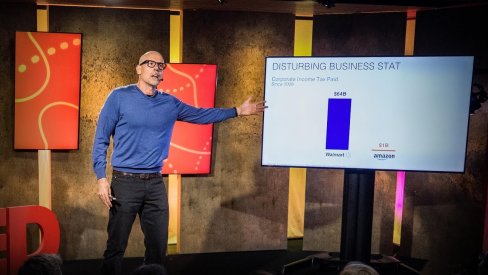