4 reasons MPs must vote for the NHS protection amendment 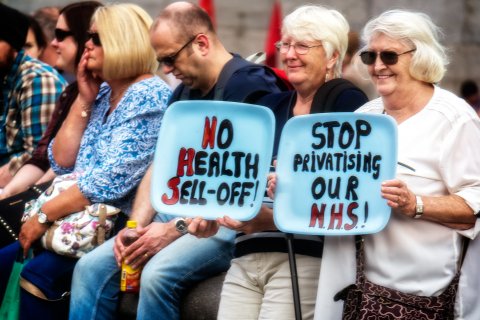 The House of Lords passed that amendment in December, and MPs now have another opportunity today, Tuesday 19th January, to protect our NHS from trade deals.

Here are four things the NHS protection amendment would do and why MPs must pass it today:

If we have now to talk about 'sovereignty,' this must mean control over our water, air, energy, common land, wildlife, national resources like the health service, care, social security, roads/transport infrastructure, education, media-sphere, law enforcement, politics and money.

Any entity which takes advantage of an unprecedented access to large numbers of people must be accountable to them. We allow them into the public space, we allow them to use our infrastructure to sell to us ; they have to be answerable to us.

We are taxed now in a multitude of ways, as well as directly, and it is about time that our politicians stopped pontificating to us about how much the public purse can afford and opened up about how it allocates money which we have paid. Talk about cultures of dependency should be kicked into the long grass. It is private companies who are leeching off public money, which have a culture of not just dependency, but entitlement and access.

If we had left it to private enterprise to provide our post-war doctors and hospitals, we would still be waiting, like many less-developed countries. Just as America is beginning to adopt our system of universal healthcare, we are allowing a small group of greedy people to sell off ours to make it more like America's, with millions of people not being able to afford proper care.

Our state schools are increasingly privately-run but not with the same good results as 'private' schools, so we have two-tier education. Our universities face collapse as students are asking : fees4what? My child paid £585 per week last term to sit in our garden shed to study. We paid for the computer, the connectivity, all work-related housekeeping. We also paid for the heating, lighting, cleaning, connectivity and security of the university infrastructure when it wasn't even being used. Nobody has mentioned discounts for infrastructure non-use, even though it is supposed to be privately-owned, and as such open to the market forces of non-demand.

Our railways are propped up by public money, as are tax-averse employers.

Our farmers are subsidised despite their outdated, polluting practices. The amenity they are supposed to provide sits on top of complete disregard for wildlife. We are re-introducing beavers while getting rid of the badgers, foxes and hedgehogs.

The so-called Royal Mail has sold the Queen's head to private companies. We could have had the parcel capacity owned by Jeff Bezos if we had not deregulated. Madness. In what world does it make sense for a private individual to be a trillionaire when we are talking about a few million to tide millions of people over during covid? How did this happen?

But to prove our cause, we must undertake to be proud of public ownership, and operate all our enterprises to the best of our abilities. And develop respect for them in our children.