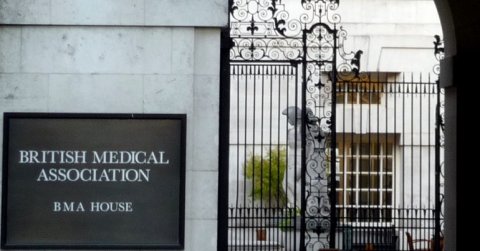 The British Medical Association (BMA) - the doctor's trade union - has today taken a strong stand against the privatisation of our NHS.

At its annual respresentatives meeting, the BMA passed a crucial motion, which demanded "public funds paid to the for-profit private sector to retain capacity which was under-used during the pandemic" to be returned.

With a price tag of £2.4 million per bed per day - the government's decision to sign a deal with private hospitals was a catastrophic waste of public money. It's now vital that money is returned to give our NHS the funding it desparately needs to deal with the backlog of planned healthcare.

The motion adopted by the BMA read:

That this meeting notes the backlog of planned care resulting from the COVID-19 emergency and the likely effect on NHS waiting lists, and calls on the BMA to:-

i. work with governments to develop a public information campaign on the likely timescale for the NHS to return to normal routine services;

ii. demand adequate funding for the NHS to increase its capacity to address the backlog of planned care;

iii. seek the return of public funds paid to the for-profit private sector to retain capacity which was under-used during the pandemic;

The deal with private hospitals is only the tip of the iceberg when it comes to privatisation in the pandemic. The government has been signing contracts with the private sector left, right and centre. And unsurprisingly, it's been disastrous.

As the BMA have also highlighted, the government has handed contracts to all sorts of companies to run chunks of the coronavirus response:

DHL, Unipart and Movianto to procure, manage logistics of and store PPE (personal protective equipment); Deloitte to manage the logistics of national drive-in testing centres and super-labs; Serco to run the contact tracing programme; Palantir and Faculty A.I. to build the COVID-19 datastore and Capita to onboard returning health workers in England.

Crucially, this has had a devastating impact on the UK's ability to get a handle on the virus. As the BMA say:

The Westminster Government’s dependence on private firms during the pandemic follows a decade of health system reorganisation and The result has been weakened and fragmented NHS services and local councils’ public health departments – with the country’s ability to respond to COVID-19 hampered. This environment may have allowed the private sector to flourish during the crisis – but publicly owned facilities, services and staff could have been invested in and utilised rather than, in many cases, feeling ignored.

In this context, it's important that we stand together and say clearly: this obsession with privatisation has to stop. If we're to get out of the pandemic safely, to see our families, to hug our loved ones again, we need a proper public health response. To get that, it needs to be delivered by people who know what they're doing - the NHS and public health protection teams - not outsourcing giants looking to make a quick buck or accountancy firms lining their pockets.

You can read more on the scale of government outsourcing and privatisation during the pandemic here. And you can take action today to stop the privatisation bonanza by calling on the government to scrap Serco's contract to run test, track and trace.

The greed has to stop!

I support all endeavours to fight the government to end the weakening and privatisation of the NHS and reverse the devastating financial cuts that have been imposed by successive corrupt politicians.

It is OUR NHS It is not for a political party to sell off. The people of the UK must decide.

The NHS is the crowning jewel of this country and is something that if lost we'd never be able to replace/afford to pay for privately. Keep it public, keep our NHS publicly owned!

NO Privatisation of OUR NHS !

This is our NHS. Keep it safe!!

Our most Vital health care can Best be given by NHS only. No private companies can work with same standards as Our NHS !! Best to our best system in the world!!

It belongs to us!

We need this best system which is Best & cheapest

Save our NHS. Return moneys given to profit making institutions back to the NHS. So they can return to their pre covid functions reducing the backlog of cases. Allowing management of covid 19 to be under the control of the nhs, Including control of PPE, testing tracing and statistical analysis.

I had better treatment from the NHS than private care.... The NHS may not be perfect but all what private medicine is all about is fast bucks.

The NHS is one of the few things left in this country to be proud of, let’s get it back to full strength.