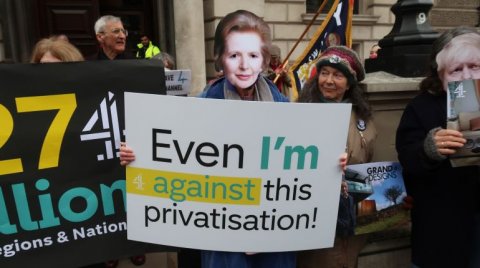 As part of the Channel 4 Ain't Broke initiative, 16 independent production companies have signed a letter to all Conservative leadership candidates, calling for them to commit to stopping the privatisation of Channel 4.

Leading companies behind popular shows (including Peaky Blinders, The Crown, and Ackley Bridge) have made it clear that this policy must be left behind with Boris. The letter has received press coverage in the Independent, Northern Echo, The Express and Star, and the Yorkshire Post.

Read the letter below

As the Conservative Party leadership election begins in earnest, we are writing to you to highlight the damage businesses like ours will face if the current Government’s plans to sell off Channel 4 are allowed to continue. We urge you to reconsider and stop the sale.

Since 1982, Channel 4 has been a Great British success story, delivering for UK audiences and making a future in television a realistic dream for everyone, no matter where in the country you are from. It’s the channel that brought us Gogglebox, Derry Girls and Four Weddings and a Funeral. It’s owned by all of us but doesn’t cost the country a penny.

Channel 4 is working well as the UK’s levelling up broadcaster supporting:

The current plans risks levelling down the creative industry resulting in:

According to the Producers Alliance for Cinema and Television, the current plans for Channel 4 risks “a direct transfer of value [away] from hundreds of SMEs and creative entrepreneurs.” In short, these plans could decimate independent production in the UK.

The public, like the industry, is against the sale. Over three quarters of Conservative voters (76 per cent) want the company to remain publicly owned, while 82 per cent of the general public are against the sell off. When the public were asked to rate ten key Government policies in a recent poll, the Channel 4 proposal was the only plan to receive a negative approval rating (-21 per cent).