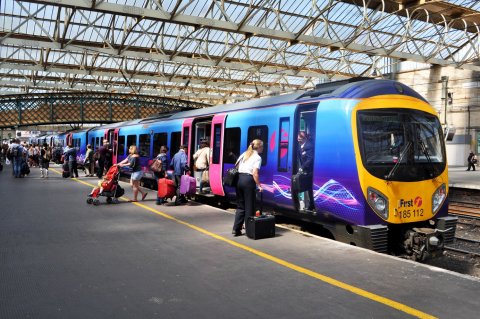 The coronavirus crisis isn't just posing a major threat to public health. It's also triggered a tearing up of economic norms.

After being told for a decade that we had to tighten our belts and that there is no magic money tree, now there is money flowing out of the government to prop up the economy.

From reading recent headlines - you'd think another norm had been torn up - rail privatisation. Various news outlets reported that the railways were being 'effectively nationalised' in response to the coronavirus crisis.

Scratch beneath the surface, read beneath the headlines and what's actually happening is a little different.

The government isn't taking over the railways and running them in public ownership. Instead, the existing private operators will continue to run our railways and be paid a fee to keep running services.

In practice, this means little change from what we're used to. The likes of CrossCountry, First and Abellio will still be running our trains. The only difference is that the government is guaranteeing their income for as long as the coronavirus crisis continues.

So the government's decision may well keep the trains running through the coronavirus crisis as passenger numbers inevitably plummet. But it ignores the elephant in the room. 25 years of rail privatisation has been a disaster, and it's ripping us all off.

Privatised rail is costing us £1 billion more every year than if our railways were in public hands. That's money that could be used to fund an 18% cut in fares, or buy 100 miles of new railway track. No wonder 64% of the public want to see the railways brought into public ownership.

And when we're through the next few months - with people returning to public transport - we'll need a railway run for the public, in the hands of the public just as much as we do right now. Not least because the threat of the climate crisis is still just as urgent and pressing as before. If we want to take cars off the road and planes out of the sky, we need an integrated public transport system with a modern, effective and efficient railway at its heart.

And we'll only get that by taking the railways into public ownership.

I know the corona virus is world wide but what I do not know is, are the government trying to make the public focus on the virus, while taking the sights of something else they are doing for eg the railways and as for save our NHS It is the past and current government's who have got the NHS in the mess it is in and all the adverts are save the NHS

Please inform me if I am missing something

Flights to Europe are cheaper than trains from Kent to London