Growing public anger against Serco at odds with government policy 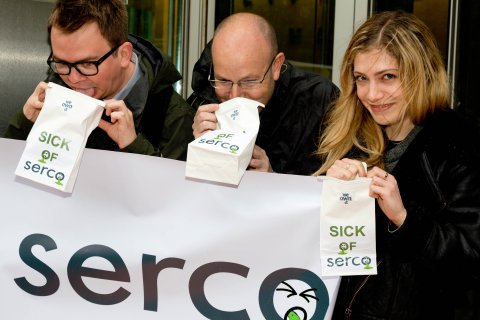 New polling shows that nearly 80% of the public thinks Serco – currently under criminal investigation for defrauding the taxpayer - should not be allowed to bid for public service contracts. Despite this, Serco has already been cleared for government work.

The polling, carried out by Survation for campaign group We Own It, showed an increase in support for public services being run by government when companies are found guilty of mismanagement or defrauding taxpayers.

We Own It held a protest outside Serco's AGM this Thursday 8th May called 'Sick of Serco'. The group brought sick bags and has the remedy to hand: a Public Service Users Bill that would provide better, more transparently run services, ensure there is always a public option and give people a say over outsourcing and privatisation.

The new polling shows that outsourcing companies like Serco, Atos, Capita and G4S have the lowest levels of trust compared to other organisations like central government, the civil service, the NHS and the police service, with 64% distrusting them and 21% trusting them.

Thursday will be the first AGM for Serco's new Chief Executive Rupert Soames, the grandson of Winston Churchill, but the campaigners say even he cannot paper over the cracks in the company's reputation.

Cat Hobbs, director of We Own It, said:
“People are feeling more than a little sick of Serco - too big to fail, too sprawling to deliver but too profit-hungry to serve us properly. Politicians are colluding with corruption. We want to see them commit to giving public service users a real say, before our sick bags overflow.”