Here’s how to really get our NHS ‘off the table’ 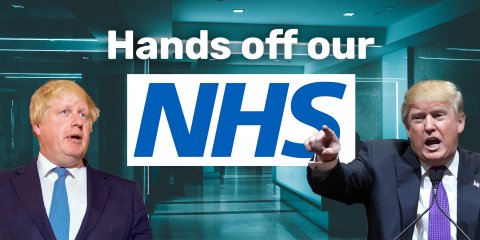 Boris Johnson is shutting down parliament to force through a no deal Brexit - and this will open the floodgates for Trump to get his hands on our NHS through a trade deal. Don't let them get away with it.

It's impossible to take the NHS "off the table" without strong new legislation to end privatisation.

That's why we are campaigning with Keep Our NHS Public and many other organisations to make this happen.

Write to your MP now and ask them to stand up for our NHS:

take action to protect our NHS

A trade deal with Donald Trump is a danger to our NHS and it's hurtling towards us fast. Boris Johnson has said that the NHS is ‘not on the table’ - but words are not enough.

As long as private companies continue to compete for  NHS services, the NHS will automatically be included in trade deals. £9.2 billion of clinical services in England have already been privatised, and billions more in equipment, support services and buildings. Our NHS is already open to competition from private companies like Virgin Care, and American companies like United Health.

The only way to really protect our NHS is to get rid of laws that allow private contracts in the NHS. The NHS has to return to a government-run service beyond commercial exploitation. Without this, it will be impossible to exclude the NHS from a trade deal.

That's why we're asking you to take action today:

Signing a trade deal also means that current NHS privatisation will be ‘locked in’ - very difficult to reverse - with the door wide open for more deregulation and takeover by US healthcare giants in the future.

There are also new threats that come with a trade deal, like privacy violations, lowering of health and safety standards, and vital medicines becoming unaffordable.

To truly protect our NHS from a trade deal, we need legislation along the lines of the NHS Reinstatement Bill that removes privatisation and competition entirely, closes the door on US healthcare giants and protects our regulatory standards.

The Keep Our NHS Public petition on change.org to keep the NHS out of trade deals has reached nearly three quarters of a million people - join them by signing here.

For more information, read the parliamentary briefing on the Keep Our NHS Public website.

This campaign is being jointly run by Keep Our NHS Public, and is supported by change.org, OurNHS, Global Justice Now, Health Campaigns Together, Trade Justice Movement, 999 call for the NHS, Socialist Health Association, Public Matters and Transnational Institute.

The NHS is too uniquely precious to the people of Great Britain to be privatized for profit.

Keep NHS safe. Too precious to allow anyone to make a profit from it. Could lead to total privertisation, as in USA where you have to prove insurance cover comes before care. If no insurance - tough!!!!

Our NHS is the lifeline of millions of people throughout our nation. It is not up for sale now and never will be. Keep your greedy capitalist fingers to yourself.

It seems the NHS is the only thing the UK has to be patriotic about. Instead of defending it with tooth and nail, it is being systematically broken up, packaged up, and flogged. Greed is championed, empathy dead. Do something about it.

I am against privatization of the NHS.

I was born with the NHS. My mom used to tell me stories of my nan and grandad not being able to afford a doctor, no way do we want to go back to those days. The NHS is not for sale.

My mother used to tell me about life before NHS. People died because they didn't have the money for the doctor. Mothers saw their babies suffer and die for the same reason. The people who are making the decisions about the NHS are never going to be affected by them. Tories with plenty money are never going to face being without health care. Makes me so angry. We have a wonderful system that serves us when we need it. It's not free. We have paid for all of our working lives through national insurance. It's just not right to be selling off our NHS!!?

I completely disagree with the NHS being privatized, the Americas don't like it that we have it free, tell them to bog off

The privatisation of education via the academies has not improved education - it has resulted in 20,000 children having no education at all. Why would the privatisation of the NHS be any different. Private health care will pick and choose the most profitable cases to treat, just as academies only educate the cheapest children to educate - rejecting those who need more support or more experienced teaching.

We all need to save our NHS & protect it from being Privatised , It work well for us ! We don,t need Trump to put his hands on it ? Our Nurseing staff & everyone else that works for our NHS DO A VERY GOOD JOB !!!!!

With the existence of so many 'Non-Tory' parties, our vote is deliberately split to water down our power.

We all need to unite on to ONE common party. Then we get what we want and the Tories wouldn't stand a chance.