JR4NHS - What we have achieved and what we hope for 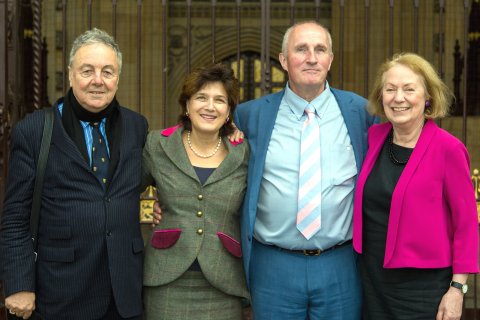 The team of health professionals who are taking Jeremy Hunt to court explain what they've won and what they're fighting for as they go to court this week.

The judicial review of government plans for a large scale and long-term handover of NHS responsibilities from local commissioners to contracted “Accountable Care Organisations” (ACOs) is scheduled at the Royal Courts of Justice in London on 23rd and 24th May 2018.
The five claimants are now four, following the death of Professor Stephen Hawking in March, but we continue to be inspired by how he continued to fight for the NHS right up to the end of his life.
Here is what he helped to achieve:
When the case started in December 2017, NHS England was planning to introduce the first ACOs by April 2018.  The Government was planning to rubber stamp swathes of regulations so that ACOs could operate.
Following massive public support for judicial review of their plans [3], NHS England promised a full national consultation on the plans.  And the Government said it will not make the regulations until after the consultation. That satisfied 2 of our 4 grounds for judicial review – our first victory.
But, at worst, ACOs and the regulations have only been delayed by one year. The policy to introduce ACOs is still very much in place.
At the heart of our concerns is that, as envisaged in the policy, ACOs would need to take on most of the functions of Clinical Commissioning Groups (CCGs).  It would be ACOs, not the CCGs, that would be responsible for making most of the decisions about providing health and care services.
But ACOs could be wholly or partly private organisations.  Unless the changes are blocked we could end up with for- profit health organisations making behind the scenes decisions on long term NHS provision. We are arguing that the law which says clinical commissioning groups must make those decisions is being subverted and that in planning and supporting ACOs, the Secretary of State for Health and Social Care and NHS England have fallen below public law standards of openness and transparency.
The thousands of people who have supported this JR demonstrate how important it is it to maintain the NHS, to be involved in its decision making and not to allow control and decision making to be handed over from bodies which the people, through parliament, entrusted with the future of the NHS.
Win or lose, support for the JR has demonstrated that the public is not willing to hand over their NHS to unaccountable, unelected organisations nor to the private sector and the campaign will go on.
In the meantime, cuts and closure of services are occurring across the country, NHS buildings and land are being sold at knock-down prices and non-clinical staff are being transferred from NHS employment into newly-formed companies.  Those plans continue whatever the outcome of this judicial review, so it is important to support local and national campaigns resisting this asset-stripping.
The judicial review claimants are represented by Jenni Richards QC and Peter Mant of 39 Essex Chambers, instructed by Kate Harrison of Harrison Grant Solicitors.
Show your support for the team outside the Royal Courts of Justice in London between 8 and 9AM on Wednesday 23rd and Thursday 24th of May.

This appalling government appears to have but one aim; a policy of privatising anything funded by the State. NHS, railways etc. etc. Aneurin Bevan will be rotating in his grave. Far too much (failing) privatisation already. See Circle et al. And as for the multi-millionaire Hunt (often accidentally misspelt); nuff said.

If our next government turns out to be a Labour one then I hope they will be able to reverse ALL the privatisation which is happening in the NHSand that they will get everyone’s support even if it will involve raising taxes.Obviousely we want standards to improve which cannot happen now with the resources available. If people want to go privately then let them join the private health schemes.