The pandemic of privatisation 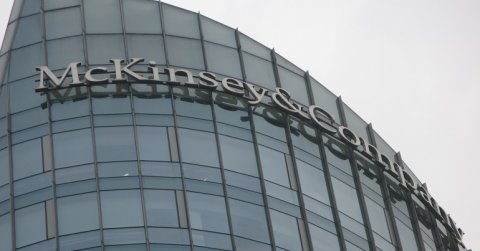 The current system for testing and tracing for coronavirus is at best questionable. It's downright unfit, in the opinion of many (the likes of the Independent Sage group, for instance). Despite this, the government seems determined, like a blinkered mule careering towards a cliff, to carry on regardless. They’ve set this system up, with private companies such as Serco (who have no experience in public health, but let’s not dwell…) at massive expense to the taxpayer, and by God they’re going to see it through.

Couldn’t get any worse. Could it?  Well….

McKinsey were ‘called in’ to look at all this, as the senior managers parachuted in to run it are going back to their former roles in private industry and the NHS. One option they considered was to make this whole parody of a working system, this entire pantomime of ill-fitted and plainly unworking (private) parts ‘more independent’. That’s privatised, to you and me. Which it already largely is, behind the NHS logo.

So that’s one mega-corporation with a known proclivity for private healthcare solutions, looking into how another two (Serco and Sitel) have ‘handled’ the biggest attempt at privatising public health in a generation. Would anyone care to guess the likely outcome?

No need. The next part of this story has already been told. Public Health England is going. To be replaced by the National Institute for Health Protection  - charged with headline-grabbing stuff like fighting major infections. While who has responsibility for the less exciting life-savers like fighting the other epidemic, obesity, is still open for debate and might even be ‘a new stand-alone agency’.

Plans were also drawn up to test everyone for coronavirus, according to Open Democracy. Since ‘scaled back’, but given to Deloitte to work out. Yes, the biggest ever public-health exercise in UK history, the largest ever possible (ie, affecting everyone), given to a private accountancy firm to set up. So that’s privatisation, privatisation, likely privatisation, and…privatisation.

I am biased: towards a public-health system which is not run down to the point of breaking, was not left totally unprepared for a pandemic despite ample warnings, and which is accountable, comprehensive and actually does what it says it should and is going to do (which the Lighthouse system has failed to be, on all counts, to date). I believe experts who have no political axe to grind when they say, the NHS and public-health systems can do this better – given at least as much money, largely because they have before and it’s what they were set up to do. Prior to over 10 years’ nobbling thanks to austerity.

That’s our money being spent. We should own it. When the true currency of doing something is measured in lives lost or saved, surely it is beholden on any state, any government, to do all they can to make sure what is being done in all our names is the very best money can buy? And this is the critical point. To date, the Lighthouse Labs system does not measure up. Public-health tracers were shown to be almost twice as efficient – yet government investment in what is left of the public-health system, with all its localised and unparalleled expertise, has been absent. Our money is being poured into large-scale, privately owned and run systems that work badly, brandish the NHS logo to the detriment of the NHS, and do not share with public expertise, when it is public lives at risk. Will truth be spoken to the public by the powerful? Or will dogma rule in the dim shadow of secrecy threatening to hide the truth from us all? Let us hope reason, and hope itself, prevail.

Alan Taman is Communications Manager for Doctors for the NHS

The pandemic of privatisation