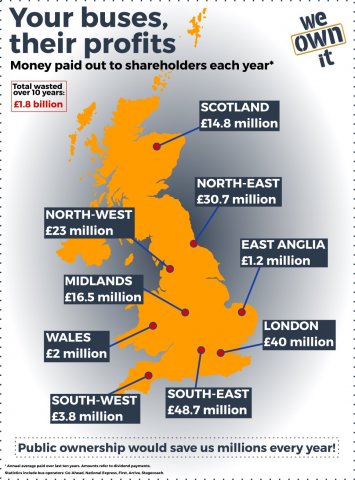 Our new research, covered in the Mirror today, shows the level of dividends paid out to shareholders of the big five bus companies: Arriva, Stagecoach, First, Go-Ahead, and National Express.

The findings reveal the dividends leaking out of each region annually. Overall, the total dividends paid out across Great Britain amount to a whopping £181 million a year on average, or £1.81 billion over 10 years. This is an absolute minimum, as it only includes the major bus operators, not the smaller operators.

The figure, £181 million annually, is more than double the amount of money that has been cut from local authority supported bus funding since 2010. These cuts, amounting to £78 million a year, have been blamed as the cause of 2,400 bus routes disappearing in England and Wales alone. Meanwhile bus fares have doubled in real terms since buses were deregulated and privatised in the 1980s.

The South East is the region that is ripped off the most, with at least £48.7 million a year being siphoned off as dividends to the parent company. London, often praised for its bus system that many people think is publicly run, leaks at least £40 million a year to shareholders. The North East (£30.7 million) and North West (£23 million) both pay out substantial amounts each year (see table below). The total leaked out of the system over the last ten years stands at a whopping £1.81 billion.

We also uncovered some areas where bus companies are making over 15% profit. Sometimes profit rates were as high as 20%. For instance, Busways, a subsidiary of Stagecoach which provides bus services in Tyne and Wear recorded profit rates of 20.29% in its most recent accounts.

At least 15 councils and MPs from Labour, the Liberal Democrats and the Green Party have supported our campaign to force the government to abandon the plans to force through this ban on new public bus companies.This includes a Conservative council in North Somerset that voted to oppose the ban on the grounds that it would make it harder for them to negotiate with private bus companies, particularly when it comes to making the most of their investment in the £200 million Metrobus scheme.

There are 11 publicly owned bus companies in Britain. These bus companies often win awards. For instance, Nottingham City Transport was recently awarded Best UK Bus Operator for the fourth time. These public bus companies often provide high levels of investment in services precisely because they are publicly owned. Reading Buses is able to invest an additional £3 million a year in the bus network (around 12-15% of its annual turnover) because it doesn't pay out dividends to private shareholders.

If the ban on new public bus companies is forced through it could scupper the chances of places like Bristol, whose Mayor, Marvin Rees, is exploring setting up a city-wide bus company.

Cat Hobbs, Director at We Own It, said: “Our new research shows bus services in Britain are being run like a racket. We are told that privatisation brings competition, but just like we see on the railway, it’s often a virtual monopoly, with huge companies benefitting from government subsidies whilst also taking passengers for a ride. People are right to ask how good could our buses be, or would my route have been cut, if we weren't lining the pockets of shareholders?”

“ Buses are an essential public service that people need to visit their families and friends, or get to work. They should be run in the interests of passengers, not shareholders. Those places where buses are publicly-owned, like Reading and Nottingham, show it’s possible to stop dividends trickling away, so that profits are reinvested in the services people use. We are calling on the government to abandon its plans to force through this ridiculous ban on new public bus companies so that other councils can dream of copying the best bus operators in the UK.”

I'm pretty sure I read somewhere that the government is also giving an additional several billion pounds to the private bus companies to renew their fleets. I can't recall the source (Guardian?) but I'm confident you can find it if I'm correct.

It seems wrong to pay these "market driven" private companies billions extra just to see them pay some of it to shareholders.

Good luck with the campaign

Thanks John - we'll look out for that story.

My mp is Andrew Jones and he allegedly, travels everywhere by car and he ALWAYS votes with the government. No point asking him....as usual.

That is how the bad guys win - too many people saying there's no point.

Just the same as the railways. Hard earned taxpayers money, given to large private companies as subsidies to maintain they profits for their shareholders. Privatisation on public transport did not work. No use getting my local MP involved either. His only interest in am issue is getting his expenses claimed.

This is astonishing. To quote from a letter I have just had printed in the local paper. I believe in buses but the variations in price are astonishing.

"I am puzzled by Bluestar bus company’s pricing. A return journey from Winchester to Southampton then into Shirley on the No 1 bus is a distance of 28 miles. The return journey is £7.50 using a dayrider ticket which works out at £0.27 pence a mile, very good value for money. It is an excellent service.

A return journey from Southgate Street to the Bell inn in St Cross road is 2.2 miles. The return journey ticket is £3.30 which works out at £1.50 a mile.

It follows therefore that the Southgate Street to the Bell inn journey is per mile 5 times more expensive than the Winchester to Southampton journey.

Why is there this large difference? If the bus journey from Southgate Street to the Bell were priced at the same level as the Winchester to Southampton journey at £0.27 pence a mile for 2.2 miles it would be £0.69, not £3.30.

This would have the benefit of reducing car use as more people would be attracted to using the bus and Winchester would become a more interesting city.

If the Winchester to Southampton journey were priced at the same level as the Southgate Street to the Bell Inn journey it would cost 28.20 x £1.50 it would be £42.80! I believe it is time for a transport commissioner such as London has to oversee the management of buses. Cheaper bus fares means we use our cars less, so there could be fewer car parks, such as those at Tower Street and Chesil Street or the enormous car parks in Southampton by the West Quay centre or Bedford Place. This land could then be used for housing surely of greater importance than car parking.