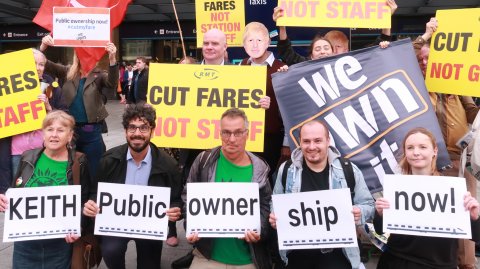 Our railway is falling apart. Franchises across the country are collapsing. If you’ve taken a train in the last two years, you’ve no doubt experienced endless delays, cancellations and chaos.

Northern, Transpennine, South Western, and the West Midlands’ franchises are all on the cusp of collapse. From all sides, people are calling for public ownership to end the chaos. Grant Shapps, the Transport Secretary is already considering bringing Northern and South Western Railway into public ownership, to join the East Coast Line. If these franchises are brought into public ownership, that would be a significant chunk of the UK’s rail network taken out of the hands of the disgraced private rail companies.

Not content with just causing chaos on the railways, Stagecoach is now taking the Department for Transport to court. They’ve been banned from franchise competitions for not following the rules around pensions - but they think they are entitled to profit from OUR public services anyway.

Once again, private companies want to walk away with all of the profit and none of the risk. Once again, they want to leave the rest of us to pick up the pieces.

It’s time we got rid of these chancers, and took control of our vital rail infrastructure. Public ownership is the only way to create a joined up railway that works for passengers and the public, not for profit.

Now's the best chance we've ever had to take back our railway. The government's review into the railways - led by Keith Williams - will soon publish its findings. Keith Williams needs to hear loud and clear that the call for public ownership is stronger now than ever. And with Grant Shapps on the verge of ending franchises, let's show him that the public want the whole railway in public hands!

This is our chance to take our railway back from the privateers, and show that the public sector can run a more efficient and effective rail network.

I used to work for BR in the S&T department as an instructor at Derby. Yes, the railway needed a shake up but it didn't need privatisation. I believe that ALL public services should be in the public domain and not with private companies to be run for profit for the few.

It won't be as cheap as you might imagine. The train operators don't own anything. The track is owned by Railtrack, and the rolling stock is leased. The government can probably take back the franchise without paying a penalty but they can't operate a service without taking over the leases on the trains and rolling stock. The only people making a profit are the Banksters. Speaking as an engineer, Railways are a 19th Century solution to a 21st Century problem. They are fundamentally inefficient because the "permanent way" isn't permanent at all. The technology was designed for coal and cattle trucks. You can stretch it a bit but railway lines require constant maintenance and so they can't be guaranteed to be available 24/7/365 for safety reasons. Higher speeds, require correspondingly higher levels of maintenance. In it's current form, HS2 will be a financial disaster to operate, even if the building cost was free. Privatisation was a mistake, but no one can make railways pay without a subsidy. The problem is rails. We need a completely different technology.

Thank you for your interesting comment. When it comes to rail, we can take franchises in house one at a time as they come up for renewal without paying a penny in compensation. We already own the infrastructure through Network Rail. When new trains are needed, we can buy them directly on behalf of the public, and save ourselves the £200 million a year currently going to rolling stock shareholders.

Rail is a necessary part of the solution to the climate crisis, as it is much more carbon efficient than other modes of transport- this should be a key consideration when thinking about its future, and investment.

Your said "It’s time we got rid of these chancers, and took control of our vital rail infrastructure". I thought Network Rail looked after the rail infrastructure where some of the blame for the poor performance of our railways should be directed. Public ownership will not solve all the issues. Do you not remember British Rail catering!

Thanks for your comment. We know that dividing track (overseen by National Rail and, increasingly, private operators) and train (to private companies) between different organisations in the process of privatisation has lead to a fragmented overall service, as this model of divvying up our railways makes coordination and improvements very difficult. National Rail would be able to function much more efficiently if it wasn't having to work with so many failing franchises. In response to your last comment, you're right that we need forward thinking public ownership, more democratic and regionalised, where service users are able to have an input on issues like catering (and much more!).

When it was publicly owned, fares were far more reasonable and affordable. I can count on the fingers of one hand how often I've been on a train in the last 2 years, twice. We need the railways back into public ownership where it should always have stayed.