Sick of a media agenda shaped by billionaires? There is another way 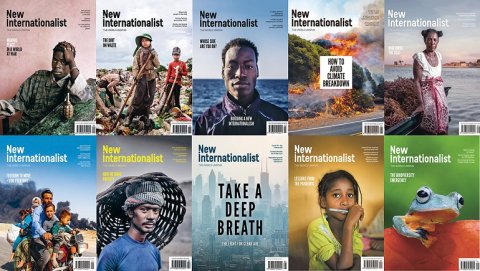 Despite the global nature of the multiple crises we face – from a raging pandemic to runaway climate change – internationalist outlooks are in short supply. Instead, we have a political landscape dominated by demagoguery, short-term thinking and ‘strongman’ nationalism.

During hard and unpredictable times, honest journalism that counters disinformation and scrutinises power is essential. As it is, much of the UK media is produced by journalists from a very narrow section of society, within businesses heavily reliant on corporate advertising and wealthy backers from the conservative, powerful elite.

In the UK, three billionaire families – the Murdochs, Rothermeres and Barclays, control over two-thirds of national newspaper circulation. According to a report published by the Media Reform Coalition in March this year, just three companies – News UK, Daily Mail Group and Reach – dominate 90 per cent the national newspaper market. When online readers are included, the market share these companies have is still as high as 80 per cent. And, according to MRC’s research, that ownership concentration has worsened over recent years. A handful of wealthy individuals and powerful companies are shaping our news agenda, limiting the range of voices and perspectives that we hear.

New Internationalist has been an antidote to this for nearly 50 years, telling under-reported stories from people and social movements across the world, particularly in the Global South. We demystify complexity, provide vital context and let people make up their own mind.

This kind of journalism sends out ripples of change. New Internationalist did a survey of our readers in 2020 and more than two-thirds said they had done something differently as a result of what they had read – whether it was joining protests, signing petitions, donating to charity or making changes in their personal lives.

Not only is New Internationalist truly independent – we refuse to take any form of sponsored content, have a strict advertising policy and don’t have a billionaire backer, corporate partner of wealthy trust behind us – but we are also owned by our readers. Run as a worker co-operative since the 1980s we brought our readers on board to join us as owners through a community share offer in 2017. We have an international spread of over 3,600 co-owners – and counting!

Right now, we’re facing a financial crisis thanks to the impact of the pandemic. Successive lockdowns have cut us off from our most effective way of recruiting new subscribers – face-to-face conversations with would-be readers at festivals, conferences and on university campuses. And so, we’ve turned to our readers once more with a call to Save Our Stories.

And they’ve been answering. So far 900 people have bought community shares in New Internationalist as part of a share offer we are running until Tuesday 1 June – less than two weeks away! People have been joining us from across the world – from the UK to Papua New Guinea, Bangladesh to Zimbabwe. The money we raise will fund our Covid rescue-plan and mean we can keep publishing our special kind of journalism in the years to come.

Community shares are a way for people to come together and put a personal stake in something they value – whether that be their local football club, favourite pub or an independent magazine.  This way of building co-operative and community ownership has been growing in popularity over the past 10 years. Between 2012 and 2020, £155 million was been raised this way to create more than businesses, community spaces and services.

When people buy community shares in New Internationalist they become members of our co-operative and joint custodians of our mission. They can take part in our co-owner meetings, join our board or become a member of our Common Council – a smaller group of co-owners who meet every three months and act as an advisory panel and sounding board.

As community owned media, we are in good company. From the Bristol Cable to the Manchester Meteor, Positive News to The Ferret in Scotland, the move to democratise the media and become owned by the audience is growing steadily.

Our readers tell us we are their ears and eyes on the world. They come to us for honest, in-depth coverage and analysis of the world’s biggest issues – alongside a vision for change and hope for the future. As we look ahead it’s important to hold onto that hope and we’re determined to stay in the fight.

To join the movement to reimagine the media and support New Internationalist to keep publishing our independent journalism, head to our Crowdfunder page.