Sick of Serco? Join us on 8th May 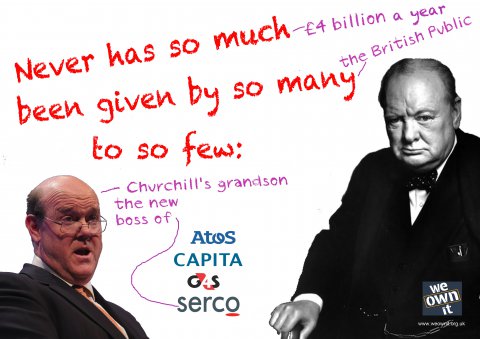 Sick of hearing the latest scandal about Atos, Capita, G4S and Serco?
Unhappy that £4 billion of public money goes into their pockets every year?
Want to have a say over YOUR public services?

Serco is kicking off the outsourcing AGM season with its meeting on Thursday 8th May. Join us to tell Serco that they're part of the problem, not the solution. The government needs to give shady outsourcing companies the boot. Sign up to the event on facebook.

Serco is currently under criminal investigation by the Serious Fraud Office for defrauding the taxpayer - they'd rather we forgot about that. The company has an image problem, and hiring Winston Churchill's grandson (Rupert Soames) as new chief executive won't solve it.

Outsourcing is failing the public. Let's tell Serco they can't paper over the cracks. We want the government to admit that the system is broken.

We're calling for a Public Service Users Bill, to give you a say over your public services, and powers to hold outsourcing companies to account. We'll be sending a message from Serco's AGM to MPs, asking them to get behind our campaign for the Bill.

Hope to see you there. Sign up on facebook to let us know you're coming or you can email info@weownit.org.uk.