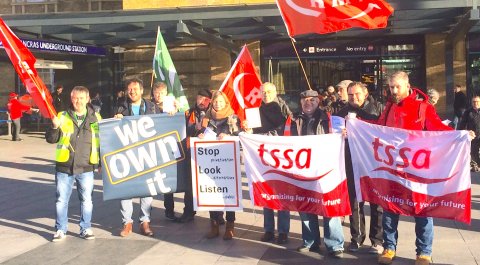 Passengers across the UK kickstart a campaign against the Citigroup sell off of major UK train stations.

This comes as it was revealed that Network Rail has hired bankers at Citigroup to ‘look at the options’ for 18 major UK stations.

The campaign to stop these sell offs has been led by We Own It with support from trade unions and passenger groups. The campaign is being launched with a week of action across the UK. Actions are taking place at Kings Cross, Bristol Temple Meads and Glasgow Central.

This week of action comes in the run up to the publication of the Shaw Report on the future of Network Rail, which is due to be published soon.

The Shaw Report could see the full privatisation of Network Rail, meaning that rail infrastructure would be handed to the private sector.

“Privatisation of stations will be a disaster for the UK public. These are some of the greatest public spaces – and the public wants to keep them that way.

We are calling on the government and Network Rail to Stop, Look, Listen.

Stop listening to bankers, Look at the alternatives and Listen to the public.

This is all part of the wider privatisation agenda. If it goes through then we not only lose vital public spaces like our stations, but public safety is put in jeopardy. Last time rail infrastructure was privatised it was a public safety disaster. Passengers and the public don’t want a return to the days of Railtrack. We deserve better.”

“Selling off these stations would be a huge blow. Our train stations are important public spaces, and should be kept in public hands. It appears that nothing is safe from the ideologically driven selling off of our publicly owned assets.”

“ASLEF strongly opposes plans to sell off Network Rail’s stations. The last thing our railway needs is to be broken up yet further. The stations generate revenue to help reduce Network Rail’s debt. The old adage, nationalise debt, privatise profit springs to mind.”

Ellie Harrison, who runs the Bring Back British Rail campaign, and will be leading the action in Glasgow, said:

“There is overwhelming public support for the renationalisation of our entire rail network. So this opportunistic and short sighted proposal to privatise some of our most-loved and well-used stations, which are still in public ownership under Network Rail, is just another example of a UK government completely out of touch with what people want or need.”

This has GOT to stop ... save the spaces we love!

A consequence of stations without staff is that there aren't any public conveniences on the stations either. At Rowlands Castle today, someone asked me if there was a ladies loo on the station - the only facility was on the next train to Petersfield, which wasn't due for 30 minutes.

I can remember that there were facilities available when the station had staff.